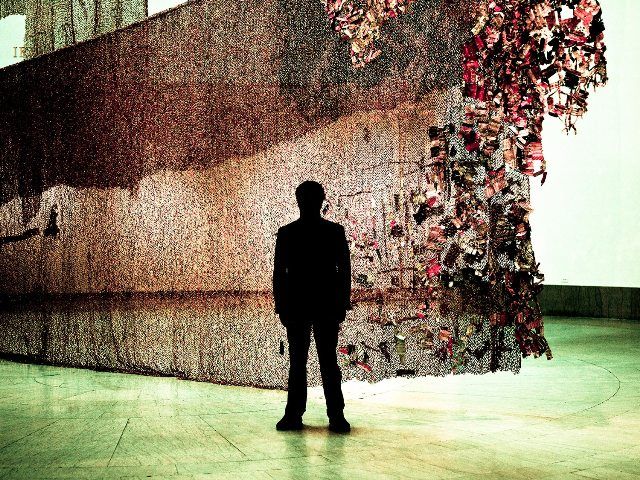 On extraordinary form once more trumpeter Ambrose Akinmusire with his longstanding quintet here extended on a perplexingly-titled album by a string quartet, plus The Vigil guitarist Charles Altura, and singers Becca Stevens, Theo Bleckmann (who features on the new Michael Wollny record Weltentraum) and the startling Canadian singer/songwriter Cold Specks.

Apocalyptic in mood, with a strong socially conscious side to it, the album opens with ‘Marie Christie’, pianist Sam Harris’ babbling brook-like accompaniment behind Akinmusire’s moody flurry of an exposition. Harris sets up ‘As We Fight (Willie Penrose)’ in a different, more narratively-inclined way, placed against snare drum patterns, and Altura’s guitar fits in snugly behind the horns, Justin Brown’s martial beat urgent and vital.

‘Our Basement’ next brings in the voice and lyrics of Becca Stevens and it’s a dramatic moment at this stage of the album, the voice very moody and engagingly strained, the OSSO String Quartet, who have already worked with Jay-Z, Ravi Coltrane, and The National among others, adding a new dimension that expand the range and ambition of the music.

‘Vartha’ has a guitar opening from Altura with a lovely Harish Raghavan bass figure the response and fleeting tambourine rhythm and then a very different aspect to Akinmusire’s tone, a little Thad Jones-like, as the melody of the ballad snakes around a ‘Footprints’-like sequence of notes momentarily to open out.

‘Memo (G. Learson)’ begun by a sinewy Brown drum solo leaning into a finely honed arrangement that blends Walter Smith III’s tenor with Akinmusire’s trumpet a little like the way Terence Blanchard and Brice Winston work together and Smith’s solo draws out the band, its open spirit enabling Harris to find a new space and then Akinmusire flies, the fluttery rapid fire almost Dizzy-like flavour to his style here quite striking.

The violins opening ‘The Beauty of Dissolving Portraits’ catch you off balance transporting you back in time to an historic long-gone America momentarily, then the flute and a plangent wash of textures develop as Akinmusire joins. Akinmusire’s writing is very original throughout and I think it’s a more confident album than 2011’s highly acclaimed album When The Heart Emerges Glistening and more experimental then both that record and the earlier Prelude: to Cora.

Bleckmann’s velvety opening to ‘Asiam (Joan)’ is the male vocal match to the earlier Stevens track, a fine balancing touch, and this song is more impressionistic as it turns out regardless of the classic balladic opening verse with the singer and the ensemble closely united experimentally as the song unfolds.

The highly rhythmic ‘Bubbles (John William Sublett)’ dedicated to the tap dancer and entertainer who played Sportin’ Life in Gershwin’s Porgy and Bess, gives bassist Raghavan plenty of room to manoeuvre in a composition that builds on repetitive devices, while ‘Ceaseless Inexhaustible Child (Cyntoia Brown)’ has an achingly tender beginning and an unforgettable vocal on this modern day spiritual from Cold Specks singing her own words on a song whose dedicatee is a tragic 16-year-old who killed.

‘Rollcall For Those Absent’ with the voice of a little child reciting a list of names familiar from news reports including Timothy Stansbury, Amadou Diallo, and Trayvon Martin’s, victims of racism in America, builds on the social commentary while the liturgical aspect of Akinmusire’s work beyond the oblique reference in the album’s title surfaces explicitly and in a spirit of humility on the increasingly free-form ‘J E Nilmah (Ecclesiastes 6:10)’, the biblical text referred to in the tune's title, ‘Whatever exists has already been named, and what humanity is has been known; no one can contend with someone who is stronger.’

‘Inflatedbyspinning’ has an almost 18th century-like chamber dimension to it led off by the strings, while ‘Richard (Conduit)’ has a rolling free anarchic energy where Walter Smith III excels to complete an absorbing and rewarding album that strengthens further Akinmusire’s reputation as an improviser and composer of considerable clout. Stephen Graham
Released on 11 March 2014