DJ divinity and the art of dreaming 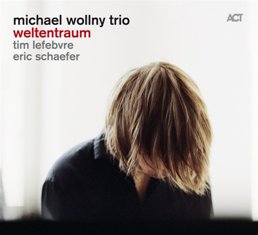 Michael Wollny trio
Weltentraum
ACT ****
It’s not the [em] line-up as bassist Eva Kruse is absent and instead it's stellar US bassist Tim Lefebvre who takes Kruse’s place on double bass in the Wollny trio here joining the pianist with the magic hands and drummer Eric Schaefer. An album stocked with a plentiful supply of rock and pop covers by bands as different as The Flaming Lips and Pink (singer Theo Bleckmann guests on Pink’s ‘God is a DJ’ where Wollny plays harpischord) there’s also, as is Wollny’s preference aligning himself through his trademark florid virtuoso approach, interpretations of classical music with work by Alban Berg, Hindemith, and Varèse as well as Wollny’s own compositions ‘When the Sleeper Awakes’ and ‘Engel’ that includes a smidgeon of Mahler. Inside the album tray there’s an enigmatic quote of David Lynch’s from Eraserhead: “In heaven/everything is fine/In heaven/everything is fine/In heaven/everything is fine/you’ve got your good things/and I’ve got mine” from the song ‘In Heaven’ performed in the film by the “lady in the radiator”. Wollny includes the song here as well performed as an instrumental and a track where Lefebvre makes his presence felt (as he also does on ‘God is a DJ’) on a fine record full of trio inventiveness. SG

Michael Wollny is touring with bassist Christian Weber and drummer Eric Schaefer this spring with dates at the Vortex, London where he played last year on 29 April; Queen’s theatre, Barnstaple (30 April); Watermill jazz, Dorking (1 May); Millennium Hall, Sheffield (2 May); and the Cheltenham Jazz Festival (3 May).