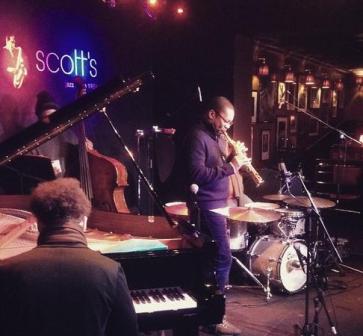 Beginning a two-night Frith Street run and currently on tour with dates in Leeds and Southampton this week, the 49-year-old US saxophonist here with his quartet of pianist David Virelles, double bassist Dezron Douglas, and drummer Johnathan Blake, spoke engagingly with the audience from the outset explaining that he had been coming to play at Ronnie’s since 1991.

He clearly felt at ease, Coltrane even name-checking pianist Virelles’ brother Alejandro a principal dancer at the English National Ballet who was watching the band from the vantage point of the bar, smiling back. As for David Virelles, whose own album Mbókò was a revelation last year, he provided highly abstract largely modal support while the Philly-born Blake on drums was the star in the band on the night, an explosive presence full of ideas. Douglas’ face was a picture to watch, a megawatt smile, sheer ecstasy in his expression as he closed his eyes and provided little three-note phrases time and time again that pulsed like the ever changing tide throughout. Coltrane switched to soprano saxophone after the first long Ornette Coleman number, his tone sometimes delicate and probing, dazzling at speed.

After a short delay at the beginning of the second set when Virelles got locked out of the dressing room and needed to get a few things from there before playing (Coltrane quipped to the audience as they waited for someone to let him in: “any old groupies got the code for the door?”) the band moved up a gear particularly on Ralph Alessi’s ‘Who Wants Ice Cream’ a tune featured on Coltrane’s 2012 Blue Note album Spirit Fiction.

And at the very end of the second set Coltrane even played the more rarely heard sopranino sax on a squawkingly effective take on the Charlie Parker tune ‘Segment.’ A flying version of Monk’s ‘Epistrophy,’ Virelles at his best, and a tender version of a 1976 tune Charlie Haden wrote for Ravi’s mother Alice Coltrane, ‘For Turiya,’ were also second set treatments to store in the memory banks for years to come. Stephen Graham