At last: Terje Rypdal and the Hilliard Ensemble release Melodic Warrior a decade on from its recording 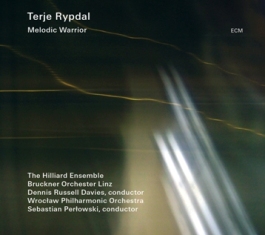 Terje Rypdal
Melodic Warrior
ECM ***
If you’re looking for one of the father figures of prog-jazz, beyond the likes of John McLaughlin and Allan Holdsworth and looking north, then in Norway the stream runs to only one chief source: guitarist and composer Terje Rypdal, as the revisiting of Odyssey last year went some way to prove. Influenced by Miles Davis and psychedelia, Rypdal here fuses these strands with jazz-prog’s other chief concern, classical music, joined by the Hilliard Ensemble on the title suite they commissioned, ‘Melodic Warrior’, a nine-part suite for electric guitar and voices with the Bruckner orchestra Linz conducted by Dennis Russell Davies in tow. There are some thrilling moments under its bonnet: the Hank Marvin-esque bravura Rypdal solo ‘My Music Reaches to the Sky’ with the coiled power of the orchestra in accompaniment, and the Hilliards as inscrutable as ever here singing Native American texts. ‘Melodic Warrior’ has taken a decade to be released, while the four part ‘And the Sky Was Coloured With Waterfalls and Angels’ (a very proggy title it must be said) was recorded with the Wrocław Philharmonic much more recently, less than four years ago. The later ‘Waterfalls’ suite, Rypdal’s op. 97 was inspired by the Cannes international fireworks festival and recorded at a festival in Poland. On balance the hefty 'Melodic Warrior' chunk of the album is most rewarding, which while ambitious and utterly sprawling, has the element of surprise and sheer power Rypdal is so accomplished at achieving.
Released on Monday 1 July