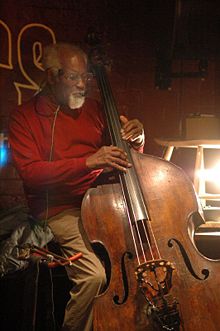 Jamaican bassist Coleridge Goode, whose career stretched back to his days spent playing with Django Reinhardt and Joe Harriott, his stylistic range just as at home playing ‘freeform’ with Harriott as swing with Django, died on Friday 2 October at the age of 100.

Fellow bassist Gary Crosby paid tribute to his friend and mentor on his personal website yesterday: “It was my great privilege to have celebrated his 100th birthday with Coleridge and his wonderful family last November, and I’d really hoped we would be marking his 101st with him this year. Sadly this was not to be.” He expressed his condolences to Coleridge’s children, daughter Sandy and son James.

Goode was born in Kingston, Jamaica and came to Britain in the 1930s to study at the Royal Technical College in Glasgow later reading engineering at Glasgow university. After initially playing violin he took up bass and was influenced by the likes of Walter Page and Slam Stewart. Living by now in wartime London he became a founder member of the Ray Ellington Quartet and recorded with a visiting Django Reinhardt. He would go on to work with free jazz pioneer saxophonist Joe Harriott extensively and continued playing at regular jam sessions in north London well into his nineties. His autobiography Bass Lines: A Life in Jazz was published in 2002 and four years ago he was honoured with a Services to Jazz Award at the Parliamentary Jazz Awards.