Tributes pour in to John Taylor who has died aged 72 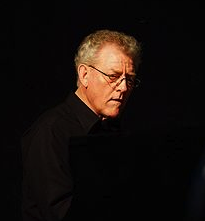 Pianist John Taylor has died having earlier suffered a heart attack while performing at the Saveurs Jazz Festival in France.

One of the most revered pianists in UK jazz history, an influence on a young generation of international musicians as well as the possessor of a strong critical reputation around the world, John Taylor since the late-1960s was a leading fixture on the international jazz scene as a player, bandleader, recording artist and educator.

Emerging initially alongside such players as tenor saxophonist Alan Skidmore, the Manchester-born musician whose style had a still self-completeness to it, English, yet of no country, cerebral at times, but with a warmth that draws people in.

He’ll be remembered above all for Azimuth, the trio that also featured his former wife singer Norma Winstone and trumpeter Kenny Wheeler, but also for his own albums as sole leader including just last year In Two Minds an exquisite solo piano album that featured JT’s three-part ‘Ambleside Suite’. Airy, passionate in Taylor’s clearly defined impressionistic style that has proved so influential on a new generation of leading players as different as Richard Fairhurst and John Turville, it is an album full of sublime rhapsodic moments and intimate asides that draw you in and never let you go. Duets, a new album Taylor had recorded with Fairhurst, had already been announced for release next month.

On social media tributes have been pouring in to the pianist and composer. Bassist Dave Holland commented, writing on Facebook: “The wonderful pianist & composer John Taylor passed away last night. Friends and colleagues since '65. Much loved.”

Pianist Django Bates wrote, also on Facebook: “When I was nineteen I used to play at Johnny Edgecombe's club in Rotherhithe with Steve Berry, Vince Dunn, David Pattman, Chris Batchelor, Steve Buckley, and Bob Callaghan. We’d play Elmo Hope, Freddie Redd, Parker, ‘Dolphin Dance’ (of course), and a few stripling’s originals. The main acts almost always ignored us. The unforgettable exception: a lovely, avuncular pianist, with more than a passing resemblance to Kurt Vonnegut, headlined one night. Before taking the stage to redefine our understanding of jazz harmony and to infinitely increase our thoughts rhythmic, he made a bee-line to us youngsters to thank us for our set, for continuing to fly the flag for this wonderful music, jazz, and to comment helpfully on what we (thought we) were doing! It was John Taylor. He remained an inspiration, a friend to so many musicians, and was always a joy to listen to.”

A former student of Taylor’s, pianist Sam Leak also paid tribute: “It was an absolute honour and a privilege to know and to have the opportunity to learn from John Taylor – a total musical hero for me and so many others as well as an incredibly sweet and supportive guy. Getting to play totally free with him for a whole lesson whilst at college was one of the exciting musical moments of my life.” SG