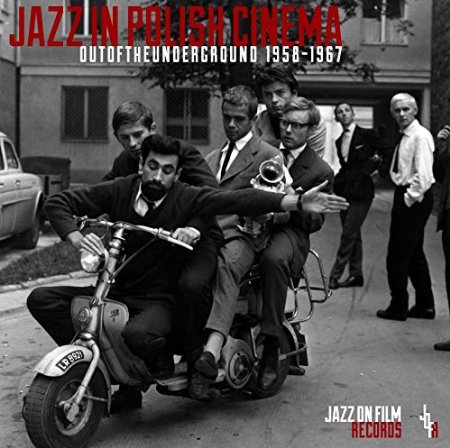 Jazz in Polish Cinema: Out of the Underground 1958-1967 (Jazz on Film Records ****), a 4-CD box set featuring remastered original soundtracks by Krzysztof Komeda and Andrzej Trzaskowski with music from Innocent Sorcerers, Night Train, Knife in the Water, Opening Tomorrow, The Penguin, shorts and documentaries The Accident, Jazz Camping, Two Men and a Wardrobe, and finally Walkover and Le Départ, is to be released on 17 November.

On the cover, above, in a scene from the Wajda film Innocent Sorcerers the director of Knife in the Water Roman Polański is seated on a Lambretta scooter behind the driver with, among others riding pillion, a bespectacled Komeda, and Trzaskowski – with his left foot poking out – keeping precarious balance.

With an introduction in the accompanying booklet tracing the historical background of the period written by Polish critic Adam Sławiński and booklet essays by Selwyn Harris each CD contains music for at least two films with the second CD featuring music from three, Knife in the Water, Opening Tomorrow, and The Penguin. Marek Karewicz photographs adorn the booklet, and as with last year’s Jazz on Film French New Wave box the set is attractively illustrated and designed.

What about the music itself? Well Innocent Sorcerers (music by Komeda) has, like a lot of the soundtracks collected here, a lot of period charm even if Sława Przybylska’s vocals when they crop up are a little of an acquired taste. The vibrant tango version of the title theme is a different story, however, and Komeda practically comes alive on ‘Radio Blues,’ with a scampering feverish run eventually a little disappointingly fading out. Tomasz Stańko’s modernist inclinations peek through on ‘Looking for Pelagia’ of which there are two versions, the second with a bluesier more aching trumpet line at the beginning.

It’s the music for Knife in the Water easily the best known of all the music collected in this box set, the big gutsy noble sound of Bernt Rosengren on ‘Ballad for Bernt’ and ‘Cherry’, the mystery, romanticism, and possibly even vulnerability of Komeda’s stabby comping on ‘Crazy Girl’ unfolding into uncertain resolution that is so appealing, and which outclasses most of the music collected in the box.

Komeda’s music for Morgenstern’s Opening Tomorrow and Stawiński’s The Penguin are hardly known at all beyond the cognoscenti and sound so much more sophisticated in certain ways compared to the Innocent Sorcerers material from just a few years earlier. Again there are sumptuous tenor themes and the influence of The Modern Jazz Quartet is quite easy to spot; and the music even has a raucous jam session feel to it, for instance on ‘Opening Tomorrow IV,’ and in the big dirty trumpet-led ‘Love Theme’. But listening without seeing the film is only half the story as ever with film music, the ultimate test is to hear it in context and assess how it all contributes to mood and plot or character development. But Komeda even with the absence of the films themselves is so expert at writing atmospherically and especially in capturing general moods, particularly ones that are either blissfully romantic or forbiddingly intense, that this limitation in appreciating the music does not matter quite so much as it might. Music for The Penguin has more of a baroque feel to it, the influence of Bach important as Harris points out in his essay. Some of the music here is a bit cheesy (for instance ‘Pingwin 7’) perhaps deliberately so, and a lot of this minor soundtrack won’t have you rushing to listen to it again much (there’s a terrible vocal on ‘Don’t Say Never More’ and ‘Take It Easy’ for instance from singer Marylin Nabiałek).

Komeda is a great lullaby-writer and his lullaby for Two Men and a Wardrobe has that morbid edge he is so adept at fashioning out of simple themes an ability that would reach its eerie zenith on Rosemary's Baby a film that falls outside the chronological limits of this stimulating box. Trzaskowski’s most intriguing and complex music here is found on Walkover, music for a 1965 Skolimowski film, and it’s well paired with Le Départ, ‘Chaque Heure est un Départ’ the Komeda theme of which is perhaps the most exhilarating and thrilling portion of the whole collection. Yet the title song of Le Départ with the vocal from Christiane Legrand [not Christine as stated] is also quintessential arthouse cinematic magic that the box set as a whole also possesses in some abundance. SG

• Jazz in Polish Cinema: Out of the Underground 1958-1967 will be launched as part of a Knife in the Water screening during the London Jazz Festival at the Barbican Cinema on 15 November, in a presentation hosted and curated by Selwyn Harris that will also include a solo piano performance from leading new generation avant pianist Marcin Masecki.