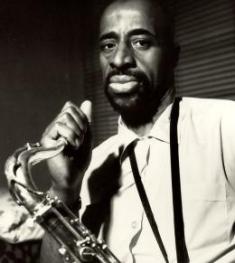 Yusef Lateef died yesterday, aged 93, at his home in Massachusetts having been ill for some months. An early world music pioneer meshing jazz, African, Indian, and Arabic musics, he was best known for his work on flute and saxophone and performed with some of the giants of jazz including Dizzy Gillespie, Charles Mingus, and Miles Davis. Originally a saxophonist Lateef switched to tenor while still a teenager, and in the bebop era was a member of the Dizzy Gillespie big band in the late-1940s. He was a mature student at Wayne State University in Detroit in the early-1950s and converted to Islam at this period in his life. His heyday as a recording artist was in the late-1950s and early-1960s with such albums as 1957’s The Sounds of Yusef and Other Sounds and later Live at Pep’s for Impulse in 1964, and The Blue Yusef Lateef for Atlantic. Lateef was a member of the Cannonball Adderley sextet from 1962-1964, and later in the 60s enrolled at the Manhattan School of Music later receiving a masters and a PhD in Education in the mid-1970s. From 1987-2002 he was a professor at the University of Massachusetts in Amherst, and in 1987 Lateef won a Grammy Award for Yusef Lateef’s Little Symphony, and became an NEA Jazz Master, America’s highest jazz honour, in 2010. RIP