Jack DeJohnette, Made in Chicago, ECM **** 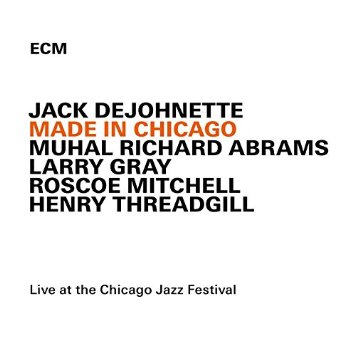 Nearly 50 years on from the foundation of the AACM an anniversary marked later this year – that’s the avant garde Chicago movement the Association for the Advancement of Creative Musicians that spawned such influential groups as the Art Ensemble of Chicago helping to codify the free-jazz movement – this record represents a fitting beginning to a year of celebrations.

Featuring the greatest living jazz drummer in DeJohnette along with the ‘philosopher’ of the AACM Muhal Richard Abrams, the Art Ensemble’s Roscoe Mitchell, influential avant composer alto saxophonist/flautist Henry Threadgill, and Chicago bassist Larry Gray, this is a remarkable quintet. Playing together for the first time in Chicago in 2013 this live album is advanced music certainly not heritage free-jazz the kind you will hear some times these days, and is as challenging an album as you’ll find at the moment without any fear of exaggeration. Six pieces beginning with the naïvely deceptive ‘Chant’ piano and sax distractedly going up and down in a simple little phrase veering in and out of tune DeJohnette providing a steady beat. ‘Jack 5’ next up begins with a beautiful drum solo, powerfully restrained and aesthetic, then Roscoe Mitchell’s tune ‘This’ with ominous flute jutting out of a stern piano passage provides different textures and points of entry the tone of the bass recorder in Mitchell’s hands a piquant surprise. Muhal’s intro to DeJohnette’s grand ‘Museum of Time’ is one of the best moments on the album the horns a scathing revolutionary commentary on the rolling thunderous line the seriousness of the album dictates. ‘Leave Don’t Go Away’ has an anarchy to it the shape of Threadgill’s tune wrestles with, the album completed by ‘Ten Minutes’ after a long spoken-word introduction from DeJohnette amid tremendous crowd reaction in the Pritzker Pavilion that breaks the spell only a little. A must for free-jazz fans. If you think jazz has gone soft this is proof it defiantly has not.