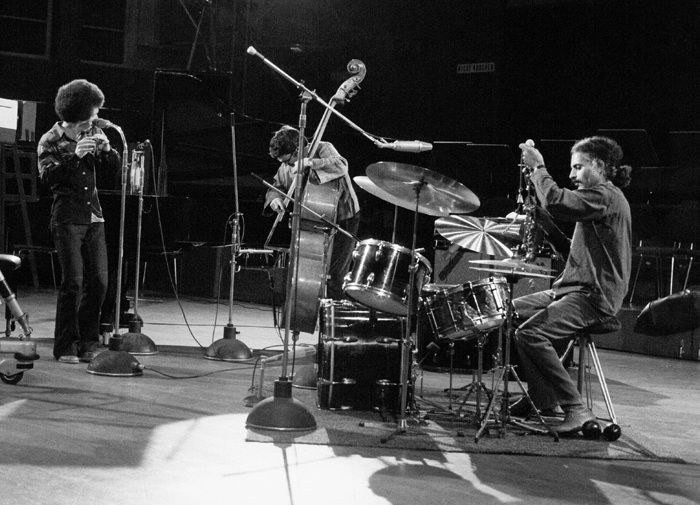 Previously in Keith Jarrett reissues: Just over a year ago, how time flies, magisterial 3-CD set Concerts: Bregenz/München and the oddity No End were released simultaneously, the period in question highly contrasting snapshots of the 1980s. In February the time machine stopped off this time in the annus mirabilis of 1975, with the reissue of long-overshadowed orchestral work Arbour Zena recorded that year, a milestone of deftly orchestrated jazz that more than stands the test of time.

However, the death of bassist Charlie Haden this year has cast a terribly large shadow over jazz globally and Jarrett’s output too, and it was somehow fitting that the prophetically titled Last Dance (not a reissue but the second part of the beautiful Jasmine studio duo sessions Jarrett made with Haden) was released in June just a few weeks before Haden’s death at the age of 76.

Now read on: Hamburg ’72, featuring the long-running Jarrett trio with Haden and drummer Paul Motian recorded for German radio station NDR on 14 June 1972, is a must for Haden fans mainly because it includes a powerful version of ‘Song For Che,’ one of Haden’s best loved compositions rounding off the album, one of only two pieces here not written by Jarrett (opener ‘Rainbow’ written by Jarrett’s first wife Margot is the other of these).

Less than a decade after his first ever recordings Jarrett had in November 1971 recorded solo piano album Facing You in Oslo, one of his biggest career achievements. And it was an important transitional period as just six months before Hamburg ’72 he would play his final shows with Miles Davis in December 1971 at the Gaslight Club in Washington DC.

Two months before Hamburg Jarrett was recording with the American Quartet (tenorist Dewey Redman joining him, Haden and Paul Motian) plus added brass and strings, sessions that would be released much later in the year by Columbia as Expectations. And just two days before the Hamburg recording the trio were taped in Munich at the Arri Kino, which circulates only on a bootleg album. The Hamburg concert too has also been widely bootlegged in different, much longer versions. This new official version comes with a remix of the original tapes that producer Manfred Eicher and Norwegian sound engineer Jan Erik Kongshaug worked up in Oslo in the summer, the sonic immediacy best captured on ‘Piece for Ornette’ when Jarrett on soprano saxophone practically leaps out of the speakers at you.

Best compared with the 1968 live recording the trio made at Shelly’s Manne-Hole called Somewhere Before (rather than the trio’s 1971 studio album The Mourning of a Star), how much less folk-y and darker the trio has become, Jarrett adds flute to his choice of instruments heard on the ancient sounding ‘Everything That Lives Laments’ plaintively accompanied by Haden. For purists who prefer Jarrett solely on piano this may be an issue. For them some of the most satisfying pianism though comes on ‘Life, Dance.’

Later in 1972 Jarrett would record Conception Vessel with Paul Motian reissued by ECM as part of an essential Motian box set last year, an album less about Jarrett perhaps than the chrysalis phase of Motian reborn as a musical thinker, and an advanced abstract expressionist at that. The signs of this transformation in the former Bill Evans drummer are apparent months earlier here on Hamburg ’72, where the crowd goes nuts at the end partly energised by his playing, clapping till their hands hurt.

Full of sheer abandon in its best parts, which include the fractured experimentalism of Jarrett on soprano saxophone going one step beyond on ‘Song For Che’, but also packed with the sheer romanticism (developed to the nth degree in later years by the Standards trio) best heard on ‘Rainbow’ right at the beginning, Motian’s jagged swing the pinch of salt that makes Jarrett’s hands ‘sing’ that bit more.

Released in the UK and Ireland on Monday 24 November