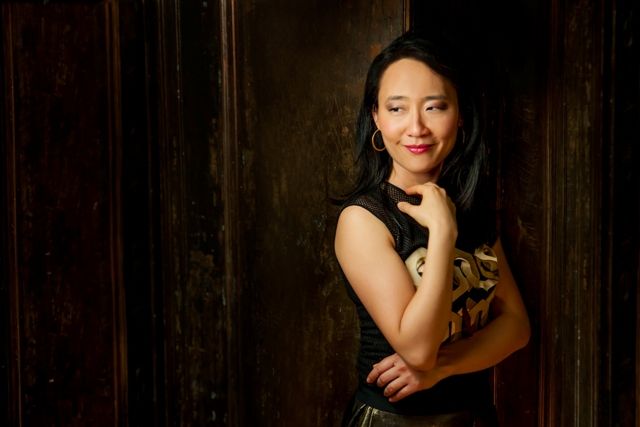 Helen Sung
Anthem for a New Day
Concord Records ***1/2
Well-known for her appearances as a member of the Mingus big band, pianist Helen Sung’s own albums as a leader track back to Push released a decade ago. Opening with her own tune ‘Brother Thelonious’ there’s a certain spring in the Houston-born player’s step from the off with some lively bass from Reuben Rogers, Charles Lloyd’s long time bassist; and a certain momentum from drummer Obed Calvaire, who was in Monty Alexander’s band when he (like Sung with the Mingus band) did club dates in London last year. With firm highlights including Chick Corea’s ‘Armando’s Rhumba’, which has plenty of life to it and comes with a quite superb Paquito D’Rivera clarinet solo, Sung’s switch to Fender Rhodes on the next track in isn’t too jarring, the guest spot from violinist Regina Carter on this track, ‘Hidden’, and then trumpet (Ingrid Jensen) joining, a refreshing direction for the album to embark on. Sung’s preferred style here is at the hip end of modern mainstream with a strong and warm supper club sound enhanced by some percussion flavours in the sextet from Samuel Torres. Rogers handles the slowing down of the album well on ‘It Don’t Mean a Thing (If It Ain’t Got That Swing’) without it becoming too old hat and Sung backs Seamus Blake’s emotive soprano saxophone solo on her own tune ‘Hope Springs Eternally’ with excellent composure. The title track with added bass clarinet from John Ellis has lots of imaginative twists and turns with Sung again switching to spacey Fender Rhodes and Blake eventually pushing the jazz-rock lever hard, Jensen champing at the bit in her runaway trumpet lines as Calvaire turns up the heat. The slightly brittle arrangement of the Livingston/Evans song ‘Never Let Me Go’, introduced in the 1956 film noir The Scarlet Hour, doesn’t quite gel, and maybe the frantic bluster of ‘Chaos Theory’ muddies the waters a little bit too much. But Anthem for a New Day moves to a strong close rounded off by Monk’s ‘Epistrophy’ and, a very cleansing choice, the solo piano track ‘Equipoise’ (which appeared on its composer Stanley Cowell’s 1974 solo piano album Musa – Ancestral Streams) brings this fulfilling album to a thoughtful close.
Released on 17 February