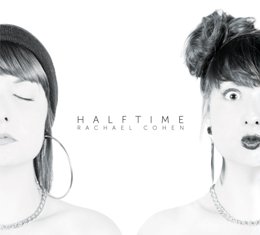 Rachael Cohen
Halftime
Whirlwind Recordings ***1/2
Saxophonist Rachael Cohen who is originally from the Shetland islands, has lived in Edinburgh, studied in Birmingham, and is now based in London making her Whirlwind debut here, the first female leader the label has featured since Whirlwind was founded in 2010. The altoist is joined by Golden bassist Calum Gourlay, Partisans co-leader Phil Robson, and Birmingham scene drummer James Bashford on an album full of Cohen original compositions plus Ornette Coleman’s ‘Just For You’ from the Atlantic release The Art of the Improvisers.

Halftime was remixed and remastered after a break-in at the New York mastering studio scuppered plans for the initial release earlier in the autumn as the master tape was stolen along with other kit. I wonder how the original master mix sounded, maybe one day we'll know if the thief has a conscience that is and returns it along with the other kit lost in the burglary. Halftime takes only a little while to unfold and I would say from second track in, the Ornette cover, settles. Very much acoustic jazz in an exact sense, the harmonies are very precise and open up like a story, the way back to the tonic an involving journey with little asides keeping your interest as the changes are negotiated effortlessly. Robson is the crucial factor here adding Abercrombie-like buoyancy and conversational pointers for Cohen to improvise imaginatively and effectively on. The album sits within the Whirlwind style nicely, hear it alongside Patrick Cornelius’ recent album Infinite Blue [http://www.marlbank.net/reviews/837-the-blue-moment]. ‘Free Speech’, near the end, is more free improv than anything else, and it’s an indication of Cohen’s range as the album moves from Konitzian territory via Ornette and even to the outer expanses of Anthony Braxton's early-1970s sound even if structurally the album takes its cue from the Cool school at its heart. The best theme melodically is kept to last, ‘Full Time’, ahead of the referee’s inevitable whistle. SG

Just released. You can hear Rachael Cohen perform at the London Jazz Festival on 23 November as a member of Kieran McLeod’s Human Resource System big band at the Battersea Mess and Music Hall http://www.londonjazzfestival.org.uk/events/info/jonathan-silk-noise-union-human-resource-system