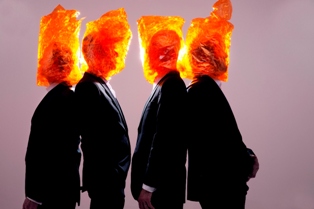 The third night features free-improv from Steve Davis’ Human at the Mac, with [updated: 16 Jan] Sixes, an experimental electric guitar night, at the Black Box. Best known for continuing adventures as part of Bourne/Davis/Kane who appeared at last year’s Brilliant Corners, Davis’ Human sound is coloured by the violin of the maverick Dylan Bates known for his work with Billly Jenkins and his tenure in the outlandish Waiting For Dwarfs. Human also features the talismanic presence of Mulatu Astatke pianist Alexander Hawkins, and the electronicist, trumpeter Alex Bonney. Being Human, their debut for Babel was released to acclaim two years ago.

The last night has Henry Cow legend Fred Frith playing solo at the Mac (support from Dave Stockard and Edward Lucas) and Bristolians Get the Blessing are at the Black Box supported by local punk jazz outfit Robocobra Quartet.
Get the Blessing, above