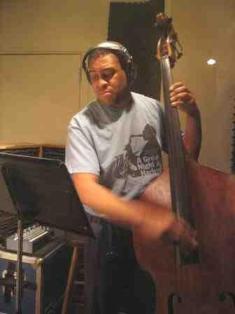 A wide range of the colleagues and friends of bassist Dwayne Burno who has died have paid tribute to the player on social media, with keyboardist Jason Lindner posting on Facebook: “We lost a true master of the double bass yesterday. Dwayne Burno, 43, schooled and inspired me as one of the bassists I played most with – in my big band and together with Roy Haynes, Jimmy Vass, Myron Walden, Eric McPherson, Daniel Freedman and so many others through the years. Dwayne embodied the very best of jazz and bass, harmony and rhythm, intellect and feel, language and improvisation. I am humbly grateful to have been able to have musical exchanges with him as much as I did. A gentleman and a scholar. Dwayne lived his last years with a new kidney while performing the globe and raising a family. Smalls Jazz Club will honour him and plans to hold fundraising for his services and his family.”

From Philadelphia, where Burno was born on 10 June 1970, the bassist played with a who’s who of prominent bandleaders since emerging on the New York scene in the 1990s including Betty Carter, Benny Golson, and Freddie Hubbard and led his own small groups. Influenced by Oscar Pettiford and Ron Carter among others he appeared in recent years on albums including the 2013 release Endangered Species: The Music of Wayne Shorter as well as a number of albums of trumpeter Jeremy Pelt’s including Soul, The Talented Mr Pelt and Men of Honor, contributing to a wide range of albums over the years by a variety of leaders including Roy Hargrove, Eric Reed, Don Braden, and Greg Osby.

Also among the tributes on social media within the last 24 hours fellow Philadelphian and bassist Christian McBride on Twitter commented: “Dwayne Burno and I used to shed together as teenagers at my house. At that time, he was a violin player. Lots of great memories. RIP, homie.” And UK-based US jazz musician Michael Janisch commented: “Thank you for showing me how to play bass and how to live with relentless conviction.”

A fundraising campaign has been set up to help Dwayne Burno’s family, a link to which can be found here: https://fundly.com/our-friend-wendy-just-lost-her-husband-and-needs-help