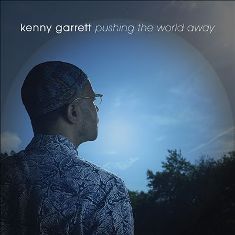 Kenny Garrett
Pushing the World Away
Mack Avenue ****
If you were to conduct an extensive global hunt, it would be extremely hard to track down a better saxophonist currently playing live in a jazz club anywhere than Kenny Garrett. But what’s his studio form like at the moment? Well, the Detroiter’s 2012 album Seeds From The Underground is a hard act to follow: but follow it and going a few steps further down a spiritual path he does with Pushing the World Away recorded in top jazzers’ midtown New York studio of choice, Avatar. He even plays spare Duke-like piano on the “with-strings” piano trio track ‘Brother Brown’, and chants on the title track. An album steeped in the love of jazz and its unique lore with pieces some of which were written with other jazz greats in mind, for instance Chick Corea on the beautiful ballad ‘Hey Chick’, and Chucho Valdés on the cracking ‘Chucho’s Mambo’ and there’s even a homage to Sonny Rollins as well. These tunes are all excellent, and surely the greats in question will appreciate the gesture. It’s young at 52 for himself as he often is to be termed a ‘great’ but Garrett has long lived up to the moniker. “Push away” in the title apparently is about getting rid of distractions and fittingly there’s no fat on any of the melodies or improvisations for that matter, and Garrett pushes hard for the spiritual dimension as well. Listen to his break out of the strict rhythm of ‘Chucho’s Mambo’ into one of the best solos of the album for just one glimpse of his sheer attack, that hearty cry in his alto wail, the dash for the salty sweet notes, the joyful letting go. Joined by a cast of players who include alternating pianists road warriors Vernell Brown and Benito Gonzalez whose gutsy montuno on ‘Chucho’s Mambo’ is a big highlight, McClenty Hunter and Marcus Baylor are the alternating drummers on the album and percussionist Rudy Bird adds a lot on key tracks, while bassist Corcoran Holt is on every track. If you are a Garrett fan you’ll have to have this, particularly to hear his tender version of ‘I Say A Little Prayer’ with a new introduction Garrett has arranged but ‘Hey Chick’ is the big tune, a standard in the making. Equally if you’re not a Garrett fan you’ll have to have this. SG
To be now released in the UK on 16 September