Vimala Rowe, John Etheridge, Out of the Sky, Dyad **** 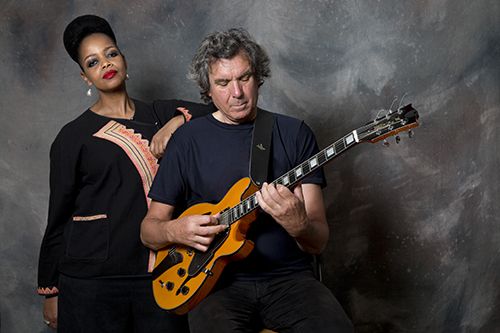 The words ‘Blue’ and ‘breeze’, a long exhalation, a mood instantly captured, the bluesy moan of voice and hum of guitar.

Out of the Sky is an album of nine tracks that frames stark themes, originals and arranged treatments of traditional African music and jazz standards as a unity. A cinematic version of an Aramaic prayer draws together the ancient culture and modern sufferings of Syria and a harrowing version of Ellington’s ‘Solitude’ are tracks for replaying most.

Largely duets (the double bass of Dudley Phillips pops up on two tracks) the wiry sometimes desert-distant Ry Cooder-like earthy quality of the veteran Soft Machine guitarist is a calm held in reserve, a landmark sound that the heart-on-sleeve carefully calibrated passion of Rowe leans in to.

The singer, who can swoop to gather up meaningful undertones, manipulating the silences, or reach high to scrape off glassy accented shards raw with expressive powerful resource, and Etheridge from their first meeting walking on Hampstead Heath have clearly bonded on this persuasive studio album recorded last summer, the majestic stillness the pair create on a moving appropriately angelic version of Kenyan singer Fadhili William’s ‘Malaika’ famously covered by Miriam Makeba where Rowe inescapably and elsewhere on the album is reminiscent of Sibongile Khumalo and she stands comparison with the best role models, remarkably complete for such a relative newcomer. Jazz singer discovery of 2016 so far? You bet.

The album moves to a vintage climax with the more familiar Bird belovèd ‘Dark Shadows’, and a version of ‘Detour Ahead’ a song that goes back to Woody Herman days (there is also a fine early version of the song by cult favourite Jackie Paris on YouTube), the only new coordinates required simply ones that involve a journey of the imagination.

Vimala Rowe and John Etheridge, above. Click for snippets from the album