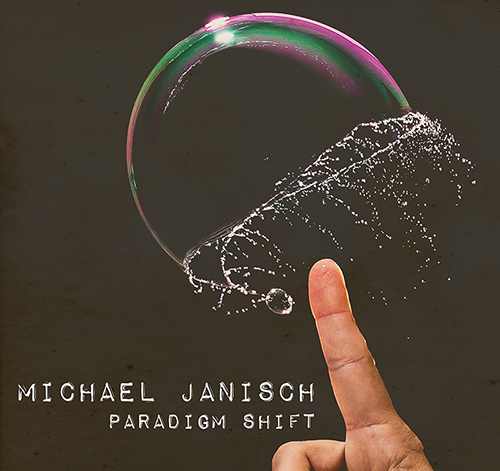 Recorded four years ago at the Pizza Express Jazz Club in London the first disc features the ‘Paradigm Shift Suite’ a complex four movement affair with short tracks wrapped around the beginning and end and a solo bass interlude midway through for good measure. Within the suite itself the fractured lead voices of trumpeter Jason Palmer and saxophonist Paul Booth jostle with the rugged rhythms bubbling up from Janisch, pianist Leonardo Genovese and drummer Colin Stranahan to create a dense stew of intersecting lines, some woozy electronics from Alex Bonney added at the end intermingled with Janisch’s solo electric bass.

The second disc, which has a more experimental flavour to it and contains a powerful solo bass intermission track from Janisch dedicated to his late brother, has a mix of compositional voices, again from the leader with Genovese, Palmer and Booth also contributing.

The band certainly don’t hold back throughout and there’s a constant fizz of restlessly probing cyclical development, Booth for instance pushing every scalar button at his disposal on the second movement of the suite, a track subtitled ‘Celestial Dictator’. Janisch, who switches between double bass and bass guitar, of course is at the heart of it all, his sound drawing on post-bop rhythms occasionally verging on an MBASE sound that finds inventive routes through a sound path recognisable say from some of Dave Holland’s bands.

There’s plenty of heat and passion to the band’s approach even if sometimes the intricacy of the writing throws up some barriers to immediacy or easy consumption. And certainly this is an album that is as much for the head as for the heart although tracks like the gorgeous ‘Awakening’ have an emotional clarity that demonstrate just what the band can do on more uncluttered material. Above all else Janisch continues to prove himself to be one of the most forward looking bandleaders around and a major stimulating presence on the UK jazz scene.

Released on 2 October. The Janisch band are on tour at the moment with dates coming up including Noth Devon Theatres, Barnstaple (16 September), Watermill Dorking (17 Sept), Robert Ludlam Theatre, Derby (18 Sept) and JJ Smyths, Dublin (19-20 Sept) and more dates running through until the end of the year. Details here