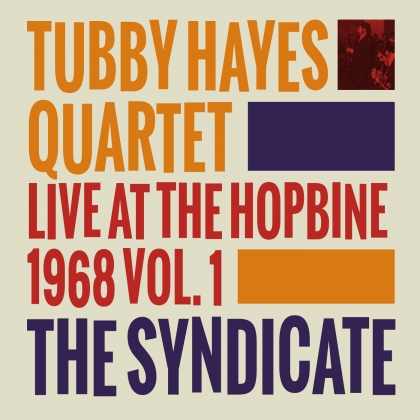 The documentary film hasn’t come out just yet. But when A Man in A Hurry finally does emerge in October this will surely be the topping on the cake that has become an incredible year for Tubby Hayes fans.

And this latest archive release certainly contributes mighty effectively as well. In biographer Simon Spillett, keeper of the flame and liner-note writer here, Hayes fans have a resolute champion. Again he doesn’t let the side down and his descriptions and commentary do much to keep alive the memory of the tenor saxophonist who was born 80 years ago this year and generated so much great jazz grounded in bebop and the modern jazz movement in Britain he was very much at the centre of in his 38 years from his teenage years on.

Recorded at the Hopbine pub in the Wembley area of north west London on 5 December 1968 there are four tracks here two on each side of the LP. (Gearbox have already issued a later Hopbine recording with a different line-up).

The Hayes boisterous title track original first up followed by the lulling Luiz Bonfá classic ‘The Gentle Rain’, and then turning the LP over weighing the vinyl absentmindedly in your hands flipping from the red to the side with the orange label for the now familiar strains of Jimmy Heath’s ‘Gingerbread Boy’, but only heard for about four years by 1968 since Heath had started playing it, and finally Hayes’ frankly riotous number ‘The Inner Splurge.’

Hayes is playing with besides Irish guitarist Louis Stewart – right at the beginning of his career that would later also see him gig with such icons as Benny Goodman and George Shearing, and beginning to pick up international recognition like collecting a special jury prize at the Montreux Jazz Festival earlier in 1968 – double bassist Kenny Baldock and drummer Spike Wells who would later become a lawyer and then a man of the cloth.

Warm and welcoming you can hear everything you need here in intimate detail given Gearbox’s high standards even bearing in mind the source and that this is a live album and the inherent difficulties presumably facing Ted Lyon recording in a pub in the first place.

The more sensuous tones of ‘The Gentle Rain’ draw out the softie in Hayes, Stewart burning and buzzing like Kenny Burrell on ‘Gingerbread Boy’, the authentic unshaven roughness of ‘The Inner Splurge’ very unlike the big band party vibe version heard on recently issued Rumpus that was recorded five months later in Finchley.

So, to sum up, there’s still more evidence of the sheer fertility of Hayes’ imagination in a live setting on The Syndicate with the promise (hinted at in the Vol. 1 tagging) of much more to come. Certainly the more you hear of the Little Giant, the more you’ll want to absorb, the main message residing in the full commitment of all four players here and their desire to be true to their inner instincts as improvisers fashioned creatively on the bandstand by what bebop and small group collaboration has best taught them.