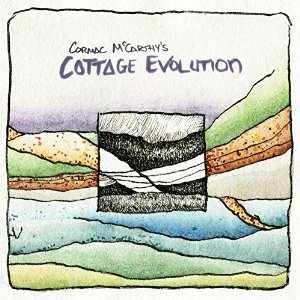 This is the debut of Cork pianist and composer Cormac McCarthy. And what a fine debut it is.

Highly melodic with a rural theme both in some of the song titles (‘The Farm Hand’, ‘Starved Rock’, ‘Sad Country’) and album iconography (as you can see above featuring rolling hills in pastel shades, a more sombre mono inset), the album operates on several levels: as a piano trio in some sections – McCarthy joined by bassist Eoin Walsh and drummer Davie Ryan as on opener ‘The Farm Hand’ – or sizing up for bigger statements to include a larger well integrated chamber group featuring woodwinds, trombone, and a small string section.

McCarthy as a pianist sounds a little like Brad Mehldau, yet it’s his writing style, while leaning sometimes towards a Highway Rider-type atmosphere particularly on ‘Bill’s Words’, making individualistic use of Irish traditional music with its lilting strictnesses and sudden bursts of passionate energy introduced via a pronounced jazz filter, that sets Cottage Evolution apart. The arranging, again McCarthy’s work, is excellent. A striking vocal by Ciara Walton at the end on ‘The Bluebell Woods’ draws tantalisingly on Celtic myth.