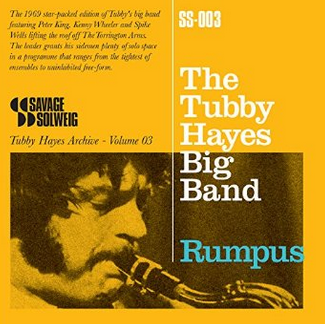 A live 1969 recording never before released of a Tubby Hayes big band performance that took place in a North Finchley pub on 8 May that year.

Hayes – according to biographer Simon Spillett’s detailed notes – played with his quartet at a gig in the Albert Hall the night before, then departed the day after this intimate super-sized Torrington Arms affair for Leeds and another gig with the smaller unit. Confining himself to tenor sax joined in the reeds section by saxists alto great Peter King, Brian Smith (tenor), Harry Klein (baritone); a trumpet section of Greg Bowen, Ian Hamer, Les Condon, and Kenny Wheeler; trombonists Keith Christie, David Horler, and Bill Geldard; guitarist Louis Stewart heard to best effect on third track ‘March Brown’ the horns egging him on, bassist Ron Mathewson and drummer Spike Wells joining the Irishman in the rhythm section. Boisterous stuff, the audience goes potty at the end of it all, quite a loud album with in-your-face sound, four of the seven tracks Hayes’ own compositions, and studded with plenty of enthusiastic count-ins from Hayes, and good-natured laughter too from the audience at the beginning of the clincher ‘The Inner Splurge.’ A warmly enjoyable romp all in all. Stephen Graham