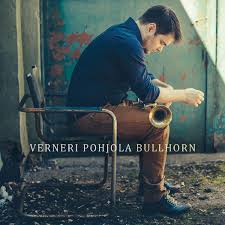 Clapping eyes on and pinning back my ears to catch the sight and sound of Verneri Pohjola for the first time in a sweatily-crowded restaurant downstairs from a sauna in the Finnish city of Tampere some years ago I couldn’t believe my luck.

In those days the trumpeter was more of a romantic the band was playing some kind of out-there version of Chet Baker all whispery and yet intense and radically different to what you can detect here.

Even by the time I had caught up with Pohjola to hear him play that late autumn night with Ilmiliekki Quartet he had already been tipped by knowledgeable followers of the Finnish scene for great things. Now it’s gutsier, just as confident, playing his own music just the way he wants it on a stimulating album backed by a lively piano trio, with tenor saxophone, trombone and cello added in along the way for more expansive touches.

Bullhorn is steeped in melancholia and although more forceful and New Melodic shares a good deal of common ground with the famed Stańko quartet which featured the Marcin Wasilewski trio back on three albums recorded between 2002 and 2006. Pohjola is a modern jazz musician, not an avant-gardist really, his sound, to make broad brushstroke comparisons, as diffident as a Kenny Wheeler on a track such as ‘In La Borie’ or by huge contrast Dave Douglas-like on the hyperactive ‘Nanomachines.’

Advanced in his playing and compositionally capable of writing convincing anthem-like melody cased in oblique structures but managing to avoid tricksiness Bullhorn is more about Pohjola than the group he finds himself heading up as he dominates proceedings so much. But that’s not a big issue given that he has so many interesting things to play and say so boldly, the band happy to go along for the ride.

On ‘He Sleeps I Keep Watch’ it’s a journey around form: a ballad on the one hand, a meditation on the other, and it’s the unexpected diversions from the norms we expect that’s so interesting overall: clearly not just a group of talented musicians playing tunes they don’t seem to believe in as there seems to be plenty of emotion too in the execution.