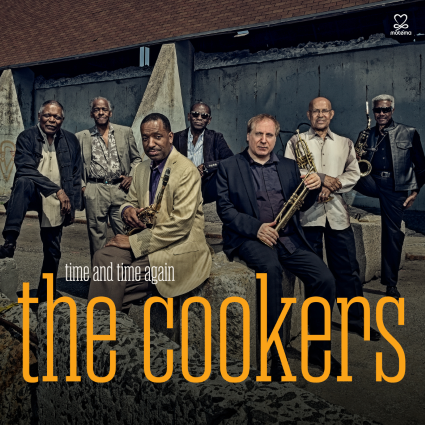 The no-nonsense veterans, who, in recent years, have set extremely high standards in driving acoustic jazz forward rather than taking a U turn to crash through the front window of the nearest museum, have been around for some seven years. Time and Time Again is their fourth album and their best. Billy Harper, tenor saxophone; Eddie Henderson, trumpet; David Weiss, trumpet, and who has also produced; Donald Harrison, alto sax, recording with the Cookers for the first time making his sinuous playing style meld right in; George Cables, piano; Cecil McBee, bass; and Billy Hart, drums, make up the band this time around, playing originals by Harper, Cables, McBee, Hart, and Weiss.

Recorded over a couple of days in May this year at Avatar in Manhattan tracks include a tender farewell to Mulgrew Miller, led off by a gently undulating, lightly gospelised Cables piano line met with aching horn ensemble response. The so, so, slow ‘Slippin’ and Slidin’’ has plenty of drama to it, and there’s a new version of Billy Harper tune ‘Sir Galahad’ opening the whole affair up, a tune that dates back to the saxophonist’s highly collectable 1973 debut, Capra Black.

The Harper-written title track is an instant classic with a testy piano and bass-line double act at the beginning tiptoeing out with Hart coming in, the horns eventually riffing against tenor. Harper shows the way he can tease on his tune ‘Dance Eternal Spirits Dance’ beginning as if he’s going to play ‘In A Sentimental Mood’ before going slightly bluesy and then opening up for a blistering display of firepower. What a delight. SG