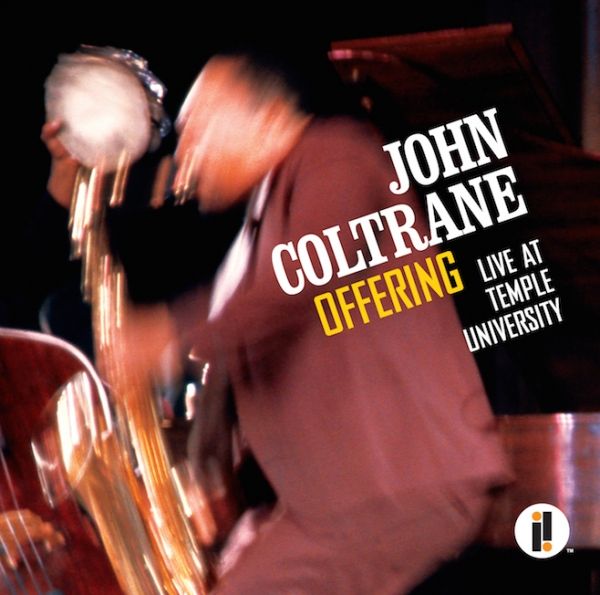 A double CD set issued jointly by Impulse, the label that issued Coltrane’s best work, and Resonance, the indie reissue archive recording outfit that has already proved its great worth with Wes Montgomery and Bill Evans archive releases, was recorded in this Student Union Board-promoted concert at Mitten Hall in Temple University not far from where Coltrane was living in the north of his adopted hometown of Philadelphia in November 1966.

With Coltrane were his wife Alice Coltrane on piano, Pharoah Sanders, tenor saxophone and piccolo, Rashied Ali, drums, Sonny Johnson on bass, with others including alto saxophonists Steve Knoblauch and Arnold Joyner, and percussionists Umar Ali, Robert Kenyatta and Charles Brown on congas with Angie DeWitt playing bata drums (some of these latter local musicians joined in to play in highly spontaneous circumstances).

Coltrane had just turned 40 and he hadn’t very long to live passing away some eight months after this concert. With excellent explanatory notes by acclaimed jazz writer Ashley Kahn the audio source is recently discovered tapes of master reels from a location recording by Temple University’s student radio station. Every Coltrane fan will pine to hear this at least once listened to quietly without any distraction in its entirety, even if it is flawed in certain ways (only Coltrane’s saxophone is properly captured in terms of the audio).

There are two tracks on the first disc, a long slow-to-manifest-itself version of ‘Naima’, and then an even longer one of ‘Crescent’; while the second more combustible disc has ‘Leo’, where Coltrane even sings wordlessly, one of the biggest talking points of this archive release; ‘Offering’, which partially lends its name to the album, and which provides some deep moments to savour, follows; and then ultimately Coltrane’s early signature tune ‘My Favorite Things’ completes the music.

The concert was attended by a young Michael Brecker. Kahn quotes Brecker who had told writer Michael Segell that the Temple University performance “propelled me into choosing music as a life’s endeavour… through the music of Coltrane I had found a calling.”

In Kahn’s notes Ravi Coltrane explains that his father was playing what Ravi calls “message music” the message that this is more than simply music, so apt. Prepare to be held spellbound. SG

Released in the UK and Ireland on 25 August