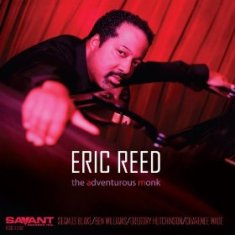 The music of Thelonious Monk (1917-1982) has been a long time interest of pianist Eric Reed’s and this has manifested itself already on his trio record The Dancing Monk (recorded in 2009) and quintet-plus-vocals outing The Baddest Monk (recorded in late-2011). This hugely gifted Philadelphian made his name with Wynton in the 1990s and is here two years on from The Baddest Monk in a quartet-plus-vocals setting, tenor saxophonist Seamus Blake returning from the quintet record this latest album having a couple of tunes in common in ‘’Round Midnight’ and ‘Evidence’. So it’s the tenorist and Reed plus the Pat Metheny Unity Group bassist Ben Williams, drummer Gregory Hutchinson, and singer Charenée Wade. Recorded in New York city in September last year The Adventurous Monk is dedicated to Cedar Walton who died a month before the recording. The tunes Reed has selected are from Monk’s bebop-defining 1940s and 50s heyday and are ‘Thelonious’, which sets off at quite a clip; ‘Work’ with a slight Cape Verdean Silveresque inflection in the way Williams’ bass line is shaped at the beginning; a romantic but bluesily matter of fact ‘Reflections’; choppily diffident ‘Evidence’; dramatic ‘’Round Midnight’, a playful ‘Nutty’ delivered with much love; gutsy ‘Gallop’s Gallop’ with Blake showing his personality; a very still ‘Pannonica’; sorrowful ‘Dear Ruby (Ruby My Dear)’ featuring Charenée Wade, a runner-up in the 2010 Thelonious Monk International Vocal Competition; and a springy ‘Ba-lues Bolivar Ba-lues Are.’ Reed is a sophisticated orthodox modern mainstream interpreter of Monk and his own personality is clearly stamped on the Spherical one’s timeless music, angled via a modern-mainstream lens delivered with maxiumum respect. SG