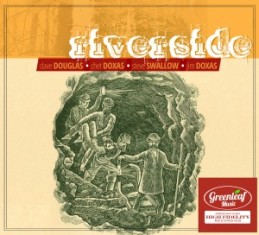 The main thrust of Riverside is its theme around the timeless music of clarinettist/saxophonist Jimmy Giuffre (1921-2008). Swallow was a member of the Jimmy Giuffre 3, however, the quartet's style doesn’t just leave it at just that and forges ahead to navigate weavingly around neighbouring styles that fit like a glove, so there are hints of bluegrass, sacred hymns and Appalachian music thrown in. The album was recorded over two days in Toronto in the late summer of 2012 after touring. 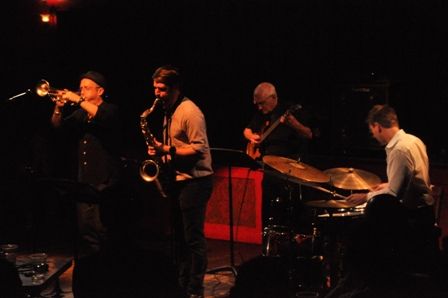 Best bits? Well I’m a sucker for Giuffre’s classic slightly unearthly ‘The Train and the River’ with its keening squawk of a tune Doxas drumming like a wannabe punk behind Douglas and Chet’s energetic runs. Doxas’ ‘Old Church, New Paint’, introduced in a two-minute burst, and then on the full tune has Chet Doxas’ buttery tone and the slow tempo churning a lazy gospelly atmosphere you could put in a can and practically scoop out at will. Douglas’ ‘Handwritten Letter’ starts where ‘Train and the River’ left off injecting frenetic pace as a twist, while ‘Big Shorty’ is more sinewy and urban. The Trummy Young/Johnny Mercer/Jimmy Mundy standard ‘Travellin’ Light’ title track of The Jimmy Giuffre 3 1958 Atlantic album issued for the first time on CD in the UK just last year has sly period charm, another highlight. Doxas’ ‘Sing on the Mountain High/Northern Miner’ at the end is a big emphatic statement that adds weight to an album that has bags of personality and buckets of warmth. Released on 15 April