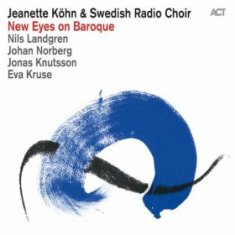 The lovely voice of Swedish soprano Jeanette Köhn is perfect for the role of static figurehead for the serpentine saxophones of Jonas Knutsson to improvise around on an album full of spookily familiar pieces by Handel, Purcell and Bach, including a misty ‘Air on a G String’. Yes, Nils Landgren, ACT’s favourite trombonist, has come up trumps co-producing and playing in mostly non-funky improvising mode tootling convincingly. Hark, there’s even a choir rising from the mists, plus sumptuous guitar performed in the right places by the album’s other producer, Johan Norberg. And what about the burbling baritone sax from Knutsson on Bach’s ‘Wachet auf’? Yes, that's OK, too. It's not a Christmas album but could operate as one, and a formula that against all odds works so very enjoyably.
Released on 25 November