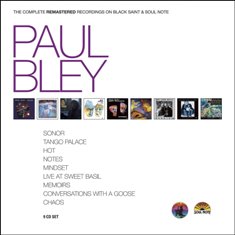 Paul Bley
The Complete Remastered Recordings on Black Saint & Soul Note
CAM **** 9-CDs, plus bonus CD
Part of a remastered reissue series begun in 2010 issued simply, and with the minimum of fuss, in a white box. There are no sleeve notes or a booklet in this instance and the facsimile cardboard sleeves make the credits difficult to read so that’s a drag in an otherwise notable and good value-for-money reissue. Bley after all is one of the father figures of free jazz, there at the birth, going back to Ornette’s Hillcrest days and while he has a big discography even during this 11 year period from 1983-1994 (he also recorded for Owl, Steeplechase, ECM, Justin Time, Sonet, hat Art, Red, Splasch (h), and Transheart) Soul Note is at the heart of a decade’s work in terms of quantity. It’s a varied offering both in terms of style and quality from Bley who remains nearly 20 years on hugely influential on a range of much younger pianists such as Ethan Iverson, Aaron Parks, and Kit Downes (listen, for instance, to 'Bley Days' on Downes' Light From Old Stars).

In the box you’ll find the little known piano/percussion album Sonor, where Bley is joined by George Cross McDonald, and illuminating solo album Tango Palace both recorded in May 1983, Bley vocalising along on the title track of the latter. Then there is Hot (1985), a deceptive album title at least and an album that's the work of the Paul Bley Group, with Bley joined by guitarist John Scofield, bass guitarist Steve Swallow and drummer Barry Altschul. It’s certainly indicative of the more carefree side of Bley, blessed with a few surprises: the intimations of honky tonk fooled me, even if the avant tartnesses could not, but the cryptic accompaniment often steals the show even with some characterful soloing from Sco and joyous tip-tip-tipping from avant gardist Altschul.

The piano/drums duo album Notes (1987) with Bley joined by Paul Motian, is next chronologically and where these Soul Notes all produced by Giovanni Bonandrini get really interesting. The sound quality is noticeably better for one thing and Bley sounds at his most rhapsodic on the title track. The interplay with Motian the most empathetic and rewarding of the box set by this point. Then it’s Bley with John Abercrombie, Red Mitchell, and Altschul again, recorded not in Milan but in New York in a Manhattan jazz club, and called Live at Sweet Basil (1988) playing Bley’s own tune ‘Blues Waltz’, standards ‘Lover Man’, ‘My Old Flame’, and ‘My Foolish Heart’, and Ornette’s ‘When Will The Blues Leave’, going back to Hillcrest days, also heard on Hot. It’s probably a question of taste but somehow John Abercrombie seems a more suitable if less obvious guitar-playing partner than Scofield if this Sweet Basil set is to be believed.

A duo album with Gary Peacock called Mindset (1992) follows and the duo setting again serves well to illuminate Bley’s intimate approach. This is really lovely, with some of Bley’s most beautifully shaped melodies (‘Meltdown’ in particular) of the box set. Peacock is as animated as Bley is reserved and this contrast creates a compelling atmosphere that reaches a bluesy unfettered peak on ‘Where Can UB’. Trio album Memoirs (1990) with Bley joined by Charlie Haden and Paul Motian is probably the best of all these albums as an overall artefact right from the very first notes of title track ‘Memoirs’. Motian sounds reborn and again the sound quality is stronger and there’s a feeling of excitement in the air and a strong Ornettian dimension especially with Haden on board and Ornette’s ‘Latin Genetics’ is also one of the well chosen 10 tracks.

The bonus CD is a very fragmentary improv album with reeds player Keshavan Maslak (aka Kenny Millions) called Not To Be a Star, Bley recorded back in Milan over three early-October days in 1992 and comes next in the sequence. It’s quite a baffling experimental album, mostly quite eccentric and not particularly rewarding but then more convincingly it’s Conversations with a Goose (1993), Bley reuniting with Jimmy Giuffre and Steve Swallow more than 30 years on from their influential drummer-less Fusion and Thesis albums with the difference that Swallow plays electric bass here. Chaos (1994), the pianist with bassist Furio Di Castri and influential English free improvising drummer Tony Oxley completes the set, Bley’s solo on ‘Turnham Bay’ mirage-like in its shimmering appeal. Notes, Mindset, Memoirs, and Chaos are the albums to best gravitate towards for the reasons explained but the variety of approach and Bley’s sheer artistry as a daring improviser is simply staggering. Stephen Graham
Released on 28 October