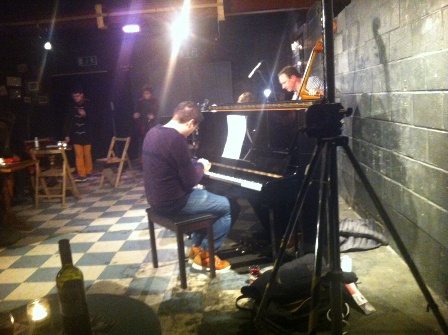 Jazz Nursery must be one of London’s more unusual venues. A monthly musician-run night based at an experimental theatre under a railway arch in Southwark with trains thundering audibly overhead, audiences bring their own drinks and sit in the cave-like space to listen to some of the finest new bands on offer on the capital’s protean jazz scene.

Chilly inside on a drizzly night pianist Barry Green rubbed his fingers to launch into ‘Great News’ followed by a lovely version of ‘You’ll Never Walk Alone’ opening proceedings at the latest running of the club. In trio mode performing with bassist Oli Hayhurst and Kairos 4tet drummer Jon Scott the highlight of the short Green trio set for me was their take on Thelonious Monk’s ‘Off Minor’, Scott leaning into a well executed solo, but also a surprise was a very subtle interpretation of the late great folk singer John Martyn’s ‘May You Never’ from 1973 classic album Solid Air. 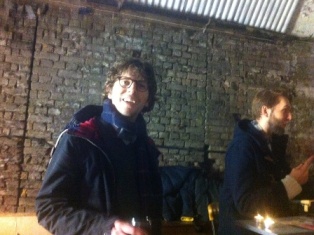 Next month at Jazz Nursery  it’s the double bill of Dice Factory and WIZ; with the James Allsopp trio and Alec Harper Quartet in April followed by the Tom Hewson Quintet/Alcyona Mick Trio in May; and the Elliot Galvin Trio/Evan Parker Trio in June.

Barry Green and Oli Hayhurst pictured top; with two of the organisers, Dom James and Nick Costley-White of the band The Dixie Ticklers, above