'I'll get my megaphone' 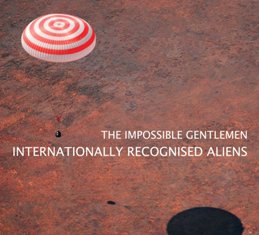 The Impossible Gentlemen
Internationally Recognised Aliens
Basho **** RECOMMENDED
Witty and warm The Impossible Gentlemen return. And it’s different this time. Dispel notions of a difficult second album. “We didn’t remake the first!” the Gents’ wisecracking drummer Adam Nussbaum says (his exclamation mark), getting his retaliation in early in the notes each Gent contributes referring to their 2011 debut, the one with the blue, Magrittian, cover. The main change is the addition of a producer parachuting in. You can glean, spookily, some kind of a visual clue from the cover in this very regard. As widely trailed the producer is none other than bassist Steve Rodby, the formidable Pat Metheny Group veteran familiar from Offramp in the early-1980s up to and including the last one, 2005’s The Way Up. As a player Rodby is only on a couple of tracks as he probably had his hands full down in Sussex where the album was recorded last year. Anyway, when Steve Swallow is around it’s probably a good idea to keep your powder mostly dry. There’s magic in the air on one of these tracks he does though appear on, Gwilym Simcock's ‘Just to See You’, as Rodby backs Swallow who takes up the strains of the lovely Metheny-esque melody, an interplay Mike Walker refers to as their “Fred Astaire and Ginger Rogers” routine.

Uncredited, and that’s not entirely why it’s probably the album’s biggest talking point, Swallow’s voice later assumes the hilariously squawking speaking role of the loud music-hating “megaphone man” on the bluesily deadpan classic ‘Crank of Cam Bay’, a great quirk of the album worth playing over and over for kicks, particularly the bit "the crank in me rises up every time."

A hugely loose rhythmic presence drummer Nussbaum knows the drill, and while on their debut record The Impossible Gentlemen I’m sure he could have sworn half the time it was still him and Swallow with Sco back-in-the-day even though he could see and hear it was patently Mike Walker playing beside him, Internationally Recognised Aliens is another time, another place: the link to the Scofield trio’s Bar Talk, Shinola, and Out Like a Light albums at the beginning of the 1980s not at all as evident now as on the Gents’ first album. Walker, already a bit of a folk hero in some parts, could even find himself co-opted into the national treasure bracket, rocking out when he needs to, and more to the point contributing some fine material including the deftly executed ‘The Sliver of Other Lovers’. There’s so much depth throughout, the tunes are better than you could ever dare hope, and Gwilym Simcock is in his element. The band sound as if they’re having fun even if the music is deadly serious with unexpectedly endearing romance-laden themes, circuitous improvising of the highest order, and big gutsy statements nipped and tucked or deliberately roughed up just right. It's quite brilliant.