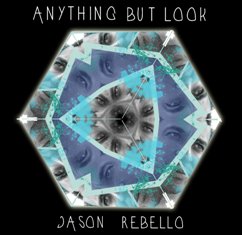 Jason Rebello
Anything But Look
Lyte Records ****  RECOMMENDED
Full of his own instrumental compositions and songs Anything But Look challengingly mixes contemporary jazz, funk, soul, latin-jazz and fusion into a sophisticated sound, Rebello joined by bassist Karl Rasheed-Abel and drummer Troy Miller and a large cast of musicians and singers also featuring on the album, including the magic fingers of bass guitarist Pino Palladino, Paul Stacey, Jeremy Stacey, Joy Rose, Xantoné Blacq, Sumudu Jayatilaka, Jacob Collier, and The Vigil’s Tim Garland. Opening with ‘Know What You Need’ featuring UK soul singer Omar, you’ll hear Rebello’s Headhunters-like accompaniment behind Omar’s voice, a link just in this snapshot to one aspect of Rebello’s soulful signature Herbie Hancock-inspired 1990s sound and here more effortlessly grooving than ever. ‘The Man On The Train’, featuring Sumudu Jayatilaka, one of the revelations of the album, is another highlight. The major instrumental features ‘Without a Paddle’ and laidback title track ‘Anything But Look’ with its big minimoog solo, set against drummer Troy Miller’s expansive beat aren’t to be outdone. Yet it’s the superb break-up song ‘Is This How?’ featuring R&B/soul star Will Downing that soars highest. The album is full of startling analogue minimoog keyboards and you can hear Rebello direct its futuristic yet very human sound on ‘In The Thick of It’, ‘With Immediate Effect’, and on a breathtaking solo on the ‘Dark Night of the Soul’, as well as the title track, the transcending ‘Anything But Look.’ SG
Released on 4 November
Read an interview with Jason Rebello here: http://www.marlbank.net/interviews/1137-staying-still-on-the-inside