Love is its own eternity 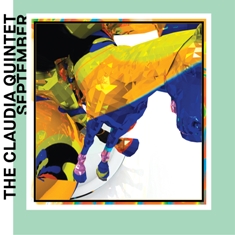 The Claudia Quintet
September
Cuneiform ****
The seventh Claudia Quintet album, September, written in and inspired by the ninth month of the year, finds drummer-composer John Hollenbeck’s band line-up shuffled a little with a new accordionist, Red Wierenga replacing Ted Reichman, and bassist Chris Tordini appearing on some tracks (a returning Drew Gress the others). It feels different, and yet the writing is as strong as ever. It seems more vibes-informed in key places even if everything hinges on the group ethic. Yet Matt Moran’s role, Greek chorus-like in key places, sticks out, and tenor saxophonist/clarinettist Chris Speed adds a mobility to the ensemble sound. An album that loops in a sprinkle of tellingly apposite spoken word in the sense of it amounting to a warning from history, the cadences of the scaldingly sarcastic voice of Franklin Delano Roosevelt (‘29th: 1936 ‘Me Warn You’), an interruption from the outside world. And, in keeping with awareness of the world beyond music, there's also an inspired reaction to a news report's theme music, but also in musical terms returning to looking within music there's also an influence taken from saxophonist Wayne Shorter as heard on his phrasing in solos on Joni Mitchell albums, here to be heard on ‘9th: Wayne Phases’. All these strands are framed quite cinematically in the writing. While Hollenbeck professes September to be his preferred month of the year, it’s also a month cloaked in sadness: and the elegy for 9/11 (‘12th: Coping Song’) is a fitting memorial. An album that makes you think inside and outside the music.
Read an interview with John Hollenbeck: www.marlbank.net/interviews/1084-disappearing-labels