Enniskillen is a small place, and only the old institutions and the landscape would be recognised from Samuel Beckett’s day in the 1920s when he went to school in the town. This still fairly new Beckett-themed festival, which began last year, manages to draw in locations and some of these old institutions Beckett would have known that would not otherwise be thought of as venues for the performing arts, although of course they are venues in other ways: for education, politics or religion, or the greatest of them all, and the most permanent and all encompassing: the loughshore environment, and in the raw of the county’s limestone, deep down into the Marble Arch caves, or far off on the mysterious islands of the imagination.

This year’s overarching main theme was based around Dante's Divine Comedy, a key Beckett literary inspiration; and instrumental to this was the use of the town as a giant stage, the caves and lakes the backdrop. There were many sights to observe: a Beckettian chess set in the Diamond, the town’s square; puffing steam engines chuffing down Church Street; and quirky locations to enable the action. My main focus of interest was the seven BBC radio plays collectively presented under the banner of Radio Gogo, in one of the town’s other main cultural institutions, Blake’s of the Hollow, in the little-used night club at the top of the classic old pub, a great room for sound rechristened the Skull by the festival director Seán Doran.

Introduced by radio and film producer Colin McKeown, the plays “to be heard in the space between the ears” as the tagline had it, were relayed on speakers set high above the blue compartmentalised screen of the stage area, the side booths with reel-like fittings dimmed and changing colour from white to violet to blue to indeterminate dangling above tables as small knots of festival-goers sipped drinks and stared into the middle distance, listening. Each performance was prefaced by the voice of Beckett at a prix Italia prize ceremony, the soft hint of his Dublin accent high pitched and measured. He said in this little clip that the “medium” of radio was a good one for writers, and so his work aired easily proved, even away from the intimacy of an old wireless set. These were also very musical. The recordings were put on at 3.30 and 7pm over four of the festival days. Originally broadcast between 1957 and 1976 the voices were a boon to hear without distractions: chief among them JG Devlin, Patrick Magee, and Jack MacGowran Beckettians revere (only Billie Whitelaw rises as high in the pantheon). 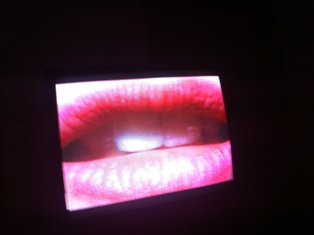 Before the radio series began, on opening day I went to a very odd place, the town’s Masonic Hall, for Neil Jordan’s Not I 2000 which was quite beautiful. Just TV screens with different angles capturing the lips of actress Julianne Moore. I passed on the opportunity to view the Masonic regalia offered by the friendly attendants sat by the door.

It gets dark now in Enniskillen around 9pm so the first of the radio plays began and finished with street lights not even illuminated, the rising moon though as the festival began prolonging the remains of the day. The first, From An Abandoned Work, followed Miranda Richardson's reading Enough at the Masonic Hall. On Sunday morning a very different voice to Patrick Magee’s, comedian Frank Skinner’s, would again draw on From An Abandoned Work, over the comedian's left shoulder in Portora's Steele Hall the honours board with the name of another old boy, Oscar Wilde, emblazoned on it. Skinner made the best Enniskillen reference in his short introduction I heard over the festival, an arcane reference to a Val Doonican song, ‘Delaney’s Donkey’, and this was the most Beckettian moment in miniature as the spirit of the music hall and old time variety (or operetta) is embedded in Beckett's work deep down. The snatches of ‘The Merry Widow’ in Happy Days is in this vein, and also present in the radio plays in limited quantities.

The Friday afternoon radio play aired was All That Fall and this was a big highlight of the seven plays. All dark but funny in a bleak way it's this latter quality as well as acute Absurdist reality that explains why they are so attractive and universal. Miss Fitt, when she made her entrance was a small indication here, and in some clever naming strands the festival pursued a comedy evening last night borrowed her name for an evening at the Enniskillen Hotel, the former Fort Lodge near the sadly defunct cinema the Ritz. 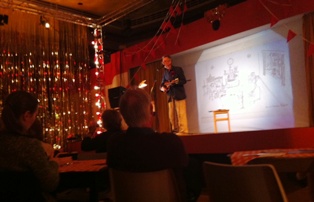 Another old Enniskillen institution only baby boomers born between the bridges really recall was another cinema, the Regal, but only its murals are left. It’s now a political place, so the organisers came up with a new name "la Salle de l’Union" (it's the Unionist Hall) to encourage everybody to come regardless of politics, and it hosted the mime and cabaret theatre programme, and some films including some by Buster Keaton who had a strong Beckettian connection.

At the Skull Embers was the heaviest of the radio plays I found; by contrast The Old Tune, an adaptation of La Manivelle by Robert Pinget the most accessible. Jeremy Howe commissioning editor of drama for BBC Radio 4 gave an interesting talk in the Skull and mentioned that he thought, given Kantor was no longer alive, following a suggestion from someone in the audience, a natural successor to the avant garde theatre director and conceptualist would have to be Peter Hall, or even David Mamet, he added, after thinking about it, as ideal Beckett directors of his. Words and Music, the beautiful Cascando and Rough For Radio completed the run in the Skull. 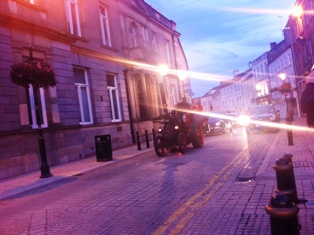 Of the talks in the McArthur Hall attached to the Methodist church nearby I managed to catch Tom Paulin who read beautifully from his own work, particularly from his collection Fivemiletown; and both he, and Tariq Ali, the great radical lecturing interestingly on Brecht and Beckett later, referred to the 17th century 30 Years War, in Paulin’s case as a kind of very apposite commentary on the Troubles.

John Hegley’s The Adventures of Monsieur Robinet in la Salle de l’Union on the final day was a witty way, in passing, to connect the French and English side of Beckett’s writing via the poet/singer's own family history, the help of an overhead projector, Billy Bragg-esque vocals and audience participation. Later he read from Mercier and Camier in the Diamond, the smoke from the puffing steam engines having disappeared into the grey island town’s early afternoon sky by then. Story/photos Stephen Graham

The Skull top, Not I lips, John Hegley, and a
steam engine outside the Town Hall at dusk