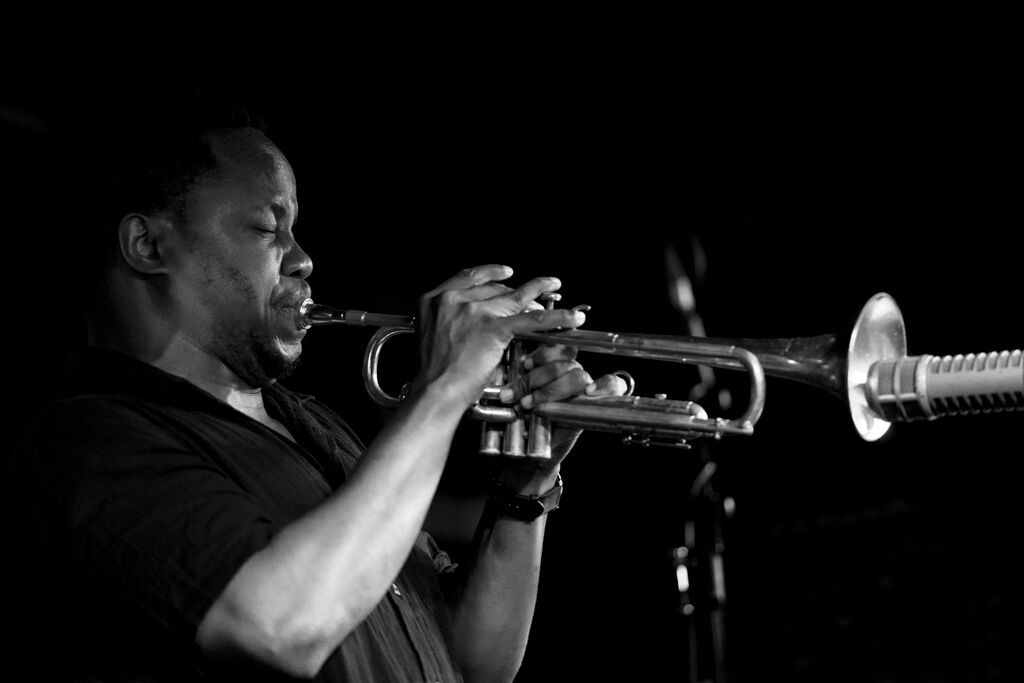 Playing the Soho club for the first time it’s a little under 18 months since the trumpeter’s most recent album The Imagined Savior Is Far Easier To Paint was released, easily one of 2014’s finest albums further consolidating the Monk competition-winning player’s reputation already well established on the global jazz scene.

‘Rollcall For Those Absent’ and ‘As We Fight’ from this latest album cropped up early in the first set, new material sprinkled in throughout as well, the mood generally serious and yet exploratory, band interplay as important as solo flourishes with strong impetus coming from the bass as much as from piano.

The trumpeter was appearing at the Pizza joined by pianist Sam Harris, double bassist Harish Raghavan and drummer Justin Brown (who has worked with UK sax star Soweto Kinch on The New Emancipation). The evening began with a short interview with the trumpeter conducted by radio presenter and podcast host Tina Edwards.

Akinmusire can pitch bend, smear, slide and use all sorts of voicings to express a range of emotions where necessary, the bell of the trumpet pushed up hard to the microphone and he isn’t afraid in his writing to use more abstract passages to considerable compositional effect, his control and ensemble awareness evident whether pushing uptempo or basking in the softer blue and purply tones he makes ample use of. Raghavan, who has also toured extensively with singer Kurt Elling, was a significant presence in contributing to the undulating flow and rubato shifts of the performance and as a trio – Akinmusire sometimes hunkering down to sit on the floor while they played – their rapport was clear as Brown demonstrated ferocious flair like a latter-day Billy Hart yet with the sound of new styles in jazz drumming post-Chris Dave also in his head. Akinmusire at times seemed to follow the lineage of Terence Blanchard in his soloing but his is a personal sound navigating far beyond orthodox hard bop in his writing, as exciting and fresh as you’ll hear anywhere. SG

Ambrose Akinmusire at the Pizza Express Jazz Club, above