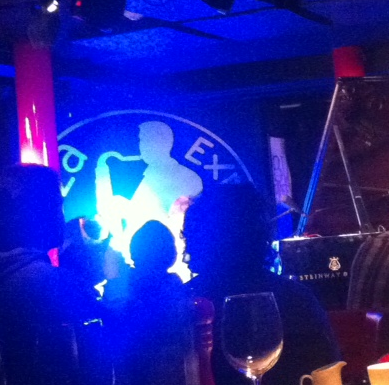 The climax of her latest run in the Dean Street club, this gig was a preview for the singer-pianist’s new album Seaside.

A late night set, the second house of the evening, a more intimate less crowded gathering, after a packed first house. With a little more air to breathe and just an hour or two before an electrical storm rocked the London area, sheets of lightning dramatically illuminating the city skies, Carroll generates her own 100 per cent human electricity as one of Britain’s finest jazz singers blessed with a huge bluesily gospel-based technique generously soaked in bebop.

Carroll began the set scatting imaginatively in the breaks between the lyrics to ‘Almost Like Being in Love’ the much loved Lerner and Loewe Brigadoon song that later became a jazz standard and that, like a lot of the songs in the set, appears on Seaside.

Switching sometimes to abandon the piano to leave the piano part to Mark Edwards, Carroll was also accompanied by the pinpoint accurate bass guitarist Steve Pearce and by super-classy drummer Ian Thomas plus on some numbers the addition of powerful trumpeter/flugel player James McMillan who also produced Seaside. Sometimes Edwards moved over to play gospelly organ cooked up on a Nord keyboard perched over by the drums on the other side of the stage playing opposite Liane on the Steinway.

Carroll was on boisterous form, loving every moment of it, cracking jokes to the audience and ad-libbing, later joshing as she tinkled a few notes of one tune she teased that she wouldn’t be singing: ‘Oh we do like to be beside the seaside’!

Other tracks from the upcoming album to get an airing included ‘Wild is the Wind’, ‘Bring Me Sunshine,’ the latter an audaciously slow and brooding remake of the Eric and Ernie theme tune. Liane introduced this song by reminiscing about having tea with her nan watching TV, eating “coleslaw sandwiches,” as the Morecambe and Wise show came on.

The big moment was reserved for ‘Mercy Now’ a brilliant two-pronged attack on the senses: sad and a tearjerker at the beginning and then a loud and proud anthem in the latter part of this winning interpretation of the Mary Gauthier song. SG