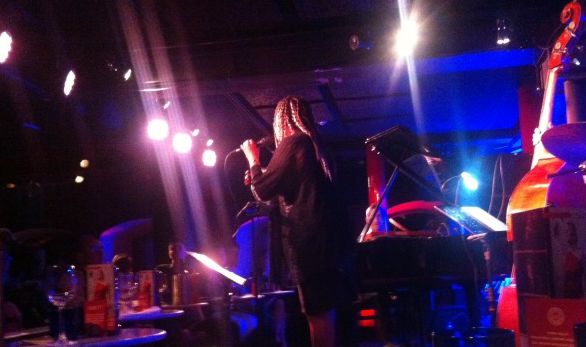 Fronting her trio from the album, which is released on Monday and reviewed here, that’s pianist/keyboardist Nick Ramm, double bassist Oli Hayhurst and the extravagantly bearded drummer Eddie Hick, who first came up via the South Trio and used to be the drummer in Gilad Atzmon’s Orient House Ensemble, Kelly was bubbly and on form, introducing each song by supplying the relevant connection to each book, mainly critical faves (50 Shades of Grey did not make the cut). She quizzed audience members on whether they had read the book... or not, and unlike real book groups the attentive audience didn’t begin to chat among themselves ignoring the book preferring to swerve off to talk about pressing issues like scandalous house prices, litter, and how crap their partners might or might not happen to be.

There were certain songs here that impressed more than the album, and with the help of a light use of electronics from both Kelly, altering the timbre of her voice sometimes via the use of an iPad-controlled gizmo (she looked down a little too much at it) and the odd Space Invaders-type effect from Ramm’s plentiful supply of perky keyboard samples, there was a surprising amount of vocals experimentation particularly on the Toni Morrison-inspired song ‘Ghosts’ with its eerie worldless vocalisations and highly effective atmosphere.

There was a fair amount of improvisation from the singer and interplay with the band on the largely original material of Kelly’s, Ramm’s darting keyboard runs injecting a certain amount of retro electro exotica that tapped acid jazz and hinted even at reggae, his more bravura runs switching to the Pizza’s fine Steinway a leap into the dark that kept us guessing aided by Hayhurst’s deftly unobtrusive sense of pulse. The Color Purple-inspired ‘Forbidden Fruit’ was one of the evening’s highlights for me, again it’s good on the album, while there was even more electronic trickery with pitch bends and distortion on ‘Magic and Mystery’, different, but no less effective, than the Spellbound Stories version, which featured the addition of a tabla player.

Kelly kept the album’s only cover, a version of Kate Bush’s ‘Wuthering Heights’, to the end and it really worked well, the singer peeling away the layers of the song to reveal its intimacy although perhaps it could have been introduced at the beginning of the second set as it’s not typical encore fare. As on the album ‘Little Things,’ which got the audience singing along earlier after a little coaxing from Juliet, was appealing, and maybe it will become her signature song in time. Who knows. But this, in any case, was a very vivacious performance by an imaginative singer-songwriter moving into her prime who takes calculated risks and deserves to be better known. SG

Juliet Kelly, above, at the Pizza Express Jazz Club as she sang songs from Spellbound Stories. Nick Ramm is just visible on piano