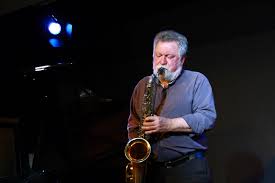 Walking on stage to introduce the concert (later he would play a spine-tingling a cappella solo soprano saxophone spot to book end the evening) Evan Parker explained that the concert would feature quartets and trios in the first half, then everyone would come together later in the second, as an orchestra.

Speaking softly Parker mentioned that he had been experimenting with “the reverberations of the space”, and the acoustics could well have been the additional player pristine in their repose, adding to the beautiful and often unusual free improvising the 18 players would produce. The larger Hall One venue certainly played its part and the sense of occasion was certainly there.

Everyone looks for ‘moments’ as this kind of music provides them either in great dollops or not at all; and the former was more the case here than the latter. John Rangecroft produced a few sorrowfully acute clarinet observations marooned among exploratory strings, sending an early frisson through the hall; while violinist Philipp Wachsmann, a frequent collaborator of Parker’s over the years, traversed the highest notes of his instrument like a dare devil tightrope walker not sure whether to jump off or draw back.

Strings played a big part of the evening and violinist Dylan Bates was a central presence, while the lightly strung guitar of John Russell when he joined Parker in a small group took the lead which he did again so very effectively in important sections when the bigger ensemble in the second half performed.

John Edwards, one of the double bassists, was a lively rhythmic presence in an ensemble that didn’t need drums. Somehow the basses and pianist Django Bates provided the necessarily oblique percussiveness, but Bates sometimes needed only a note to make his presence felt against the heavy silences and clearings the spontaneous improvising allowed.

Parker had earlier dedicated the evening to drummer John Stevens (he and Parker featured on the classic SME album Karyobin from 1968) who did so much for free improvised music during his lifetime, just as Parker himself continues to do on the wider international stage.

There were some unusual aspects to the evening: the odd unicorn-like stroh viola was a rare sight; and Bates when he played the little euphonium-like peck horn found interplay with trumpeter Percy Pursglove that became a kind of turning point, Pursglove’s beautifully judged clarion cry of a solo break-out near the end another of those moments the evening thrived on. Stephen Graham