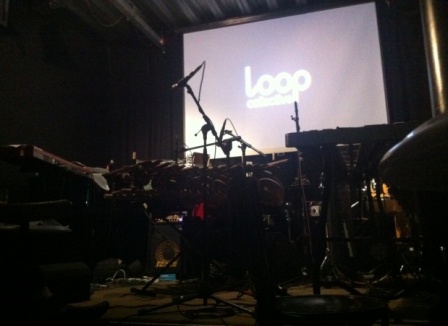 The Dan Nicholls-curated Loop Collective club night at the Vortex had a few surprises in store chief of which was the exhilarating opening performance by the Bex Burch ensemble. Percussionist Burch, playing a specially adapted balafon-like xylophone accompanied by a strong integrated percussion section featuring Cloudmakers trio’s Jim Hart opposite her on vibes, Robert Plant drummer Dave Smith on kit, Nicholls on keyboards, and Simon Roth percussion, with Tom Challenger on tenor saxophone adding long continuous spiritual sounds on top of the scintillating spread of Ghanaian derived traditional Gyill music. 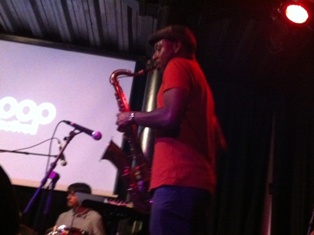 The second band on saw drummer Tom Skinner replace Seb Rochford whose name had been on the programme to appear. Sax player Shabaka Hutchings later told the audience the change was for “professional reasons”. However, the rest of the group was as billed, and saw Hutchings and Skinner joined by Leafcutter John of Polar Bear, and electric bassist Ruth Goller of the new band Let Spin. With lots of electronic effects spun across from John’s laptop and Hutchings adding in woozy effects of his own including little delays where he could improvise selectively against his own creations the band built everything around Goller’s strong pulse and bass figures firstly from her tiny five-string bass. John sometimes sang into the microphone his voice altered by the electronics and Skinner showed his mettle with wave after wave of constantly shifting polyrhythms. Hutchings switched from tenor to clarinet briefly towards the end of the long continuous improvisation where his energy level was high and the band responded suitably, yet this was a nuanced performance with subtle shifts retaining a high level of spontaneity. John’s role was vital, he was like the invisible keyboardist as well as an additional percussionist and so many of the sounds with their zappy sci-fi tech-y dimension simply threw a curveball to the band to respond to, Hutchings typically taking up the challenge.

Dave Smith returned as part of the next band on, Strobes, that’s Nicholls’ group also featuring the guitar and electronics of Matt Calvert and the pin sharp visuals of Screwgun label graphic artist Stephen Byram on the big screen behind him. The rapport between all three was immediate and Smith came into his own all guns blazing. Stephen Graham

The Vortex stage set for the Bex Burch ensemble top. Also pictured Shabaka Hutchings on sax, and Tom Skinner behind him on drums.