The Claudia Quintet
MAC, Belfast
Making their Irish debut the Claudia Quintet cut an unusual dash. Defiantly beyond genre, “post-jazz” even, as their music has sometimes been dubbed, John Hollenbeck’s tunes have an intricate yet human appeal and in shape and direction are certainly closer to contemporary classical music than anything approaching mainstream straightahead jazz not that this prevents appreciation of their method at all. In the first half of last night’s gig I didn’t detect the rockisms the band is sometimes associated with, more an interconnected acoustic quintet improvising in a collective manner around the tight shell of Hollenbeck’s compositions. 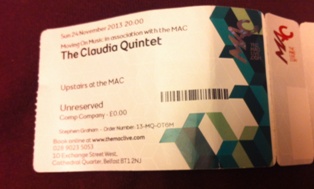 The deftly looping spoken word section featuring the oratory of Franklin Delano Roosevelt in a pro-welfare speech (‘29th: 1936 Me Warn You’), which appears on their new Cuneiform album September, a warning from history in many ways, FDR’s voice matched in the trajectory of his voice by muffled drums, the improvising contours of Red Wierenga on accordion and Chris Speed on clarinet, was certainly the most thought provoking aspect of the first set. Wierenga and reedsman Speed are not really front-line players in a conventionally structured “blowing” jazz sense, there’s a rhythmic pushing and pulling that requires constant responses to the formidable rhythms thrown up by Matt Moran’s vibes, Hollenbeck skirmishing interjections on brushes and kinetic bass of Drew Gress.