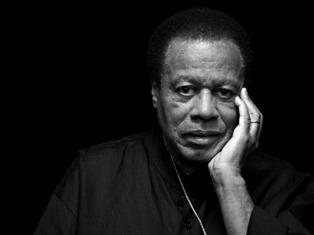 From the moment Wayne Shorter walked on stage with his quartet it was clear from the audience reaction that this was going to be a special evening at the London Jazz Festival. And so it proved. In a concert split into two parts, the first a quartet performance, and the second when the quartet was joined by the BBC Concert Orchestra, Shorter, 80, this year, as is his custom did not speak to the audience, and none of the music’s titles were announced but the performance will be broadcast by Radio 3 between now and Christmas, as Jez Nelson, who roused the audience before the quartet came on, with a big introduction, made mention. The highlight of the evening came in the second half’s inclusion of the long piece ‘Pegasus’ from Shorter’s latest album Without A Net, his most significant orchestral work to date, the arrangements last night by the quartet's bassist John Patitucci. With their open lines, warmly voiced reeds and hurtling violin escapades the ensemble passages lit up by out-of-nowhere spectacular cymbal splashes from Brian Blade and the exploratory pana-Monkian harmonies of Danilo Pérez, Shorter playing soprano saxophone increasingly as the concert developed would add little quizzical touches here and there, wise and mournful, or joining to run with the clarinets of the Concert Orchestra to add a certain drama to the pulsating Blade rhythm inventions and fertile beyond-the-bar-line bass phrasing. An evening that lived up to its billing, Shorter not resting on his laurels, challenging our perceptions and fixed ideas about the ambitions of jazz once more to mesmerising effect.
Wayne Shorter, above right photo: Robert Ascroft