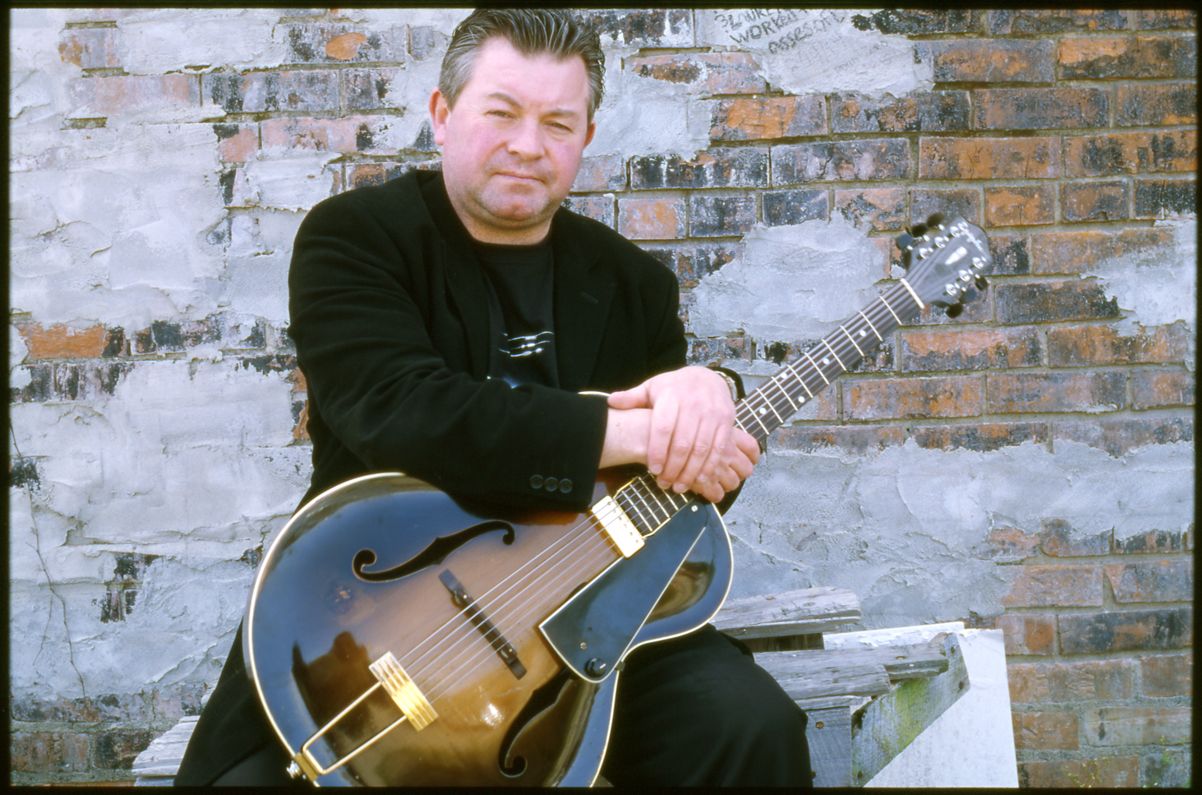 Making his London debut at BluesFest is Nigel Mooney who appeared earlier this autumn at the Limerick Jazz Festival with his septet.

In his blues incarnation in the 1980s with his Gripewater Blues Band Mooney honed a sound he had built from his interest in the blues dating back to his schooldays and early listening to Eric Clapton, John Mayall, Peter Green, and BB King. Years later with the band that listening would be closer to the source still opening for BB when the blues great’s relentless touring reached Dublin. Now in his early-fifties, Mooney is 51, not 49 as stated on Wikipedia, with the Gripewater band in his early twenties it was “playing all those Willie Dixon numbers and then discovering the jazz stuff, searching for a new style,” he says. That new style would come tumbling down, first via Jimmy Smith’s organ and George Benson’s guitar. Mooney would also be listening to some Charlie Parker, some John Coltrane, and some Ahmad Jamal along the way.

Mooney grew up on Dublin’s south side, in Rathfarnham, and moved out to Wicklow, but now lives in the north of County Wexford. The blues scene in those distant days in Ireland included such totemic figures as Belfast scenester Jim Daly who Mooney first met in the unusual circumstances of JFK airport in New York. It was “an infamous situation,” Mooney explains. “A big company had gone bust and we were stranded with no return flight waiting for two days in the airport. I got talking to this guy, who was telling me about playing in Chicago with Sunnyland Slim, and I was amazed. I said to him: did he know Jim Daly? ‘I am Jim Daly’!” a story that amuses Mooney’s friend and fellow guitarist Ronnie Greer who used to play with the keyboardist’s blues band and who even addresses Mooney as I Am Jim Daly.

The Gripewater, with a core quartet line-up, filled a gap on the Dublin music scene of the time more attuned to heavy rock, and would play at Tommy Dunne’s tavern in Dublin, a place that used to be the Parliament Inn near the Capel St Bridge, and which is now a bar/restaurant called the Turk’s Head. There were three floors of bars, and gradually the better the band were the higher up in the building they would play. “It was a very old building but old and dilapidated as well, a good place to play,” Nigel recalls. “The top floor was dangerous and a fire hazard but when we got grooving on a Chicago blues if you went down below the top floor, as I would do for something, if a saxophonist was playing, you might get some plaster on your head as the band grooved and the crowd danced upstairs.”

That scene ended with no notification abruptly in late-1985, early-1986, when Mooney arrived one Saturday night ready to play, quite a large number of punters standing around outside, and the venue’s shutters were still down. The gig was finished. After that the transition began towards jazz and Mooney started to play at JJ Smyths on a Friday at that time not putting on any jazz, and in late 1986 and the early part of 87 saxophonist Richie Buckley started coming in and playing with Mooney and his bluesmen on a regular basis. Nigel says: “The band started introducing Charlie Parker tunes and it was a gradual graduation. I was still too lazy to learn all the key changes. But we brought in a drummer who swung a bit more.” When the Gripewater stopped Mooney began to play with band leader Earl Gill’s seven piece at the Shelbourne Hotel, and also with jazz pianist Tony Drennan in the 1990s, and they would play all sorts at hotel gigs and at weddings and functions. Mooney’s ear was changing.

Playing BluesFest, the headliners of which this year include Elvis Costello, Van Morrison, and Gregory Porter, Mooney is leading his band of Johnny Taylor on piano, Dan Bodwell on bass, and Dominic Mullan, drums, his main quartet, the guitarist-singer says, of the last few years.

As for records The Bohemian Mooney issued by Lyte Records last year Mooney says was a stop-gap and came some 10 years after All My Love’s In Vain. He says he had put writing for the band on the “long finger” and with a few changes in personnel in his band from the In Vain days he says hadn’t been “writing diligently” and instead “cobbled together” the album, initially an idea and concept for the septet. On it Georgie Fame also pops up on a Freddie Green song, the great Mose Allison-influenced singer/organist and 1960s pop star who Mooney has known since the late-1980s when Georgie was playing with Van Morrison. Van, with Richie Buckley, would come down to Nigel’s gigs, and Nigel would go to Van’s. An enduring friendship with Georgie was developing.

In terms of the vocals side of his performances Mooney says as a listener he likes Chet Baker, Frank Sinatra and Joe Williams as well as Tony Bennett, Nancy Wilson and Sarah Vaughan. He’s not a devotee of Ray Charles he says but ‘Ain’t That Love’ on the album even so shows a deep understanding and flair for the High Priest of Soul’s approach. The real tour de force of the album perhaps is ‘Bohemian Moondance’ where Van classic ‘Moondance’ metamorphoses effortlessly into ‘Milestones’ by Miles Davis, a natural fit in Mooney’s hands. The bandleader says he used to play ‘Moondance’ at gigs which he mentions tactfully was requested “too many times”. So after a while he decided to rewrite the bridge, change the tempo, and play it “a bit different and hoped nobody would notice!” Ah well, that cat’s well and truly out of the bag. You’d also imagine Mooney at BluesFest won’t go unnoticed either by blues and jazz fans making the scene. Stephen Graham

Nigel Mooney, above. The Mooney quartet play the Verdi space in the Albert Hall during BluesFest. Showtime on the afternoon of 27 October is a quarter to four.