The latest Marcin Wasilewski album Spark of Life is an extension of the pianist’s 20-year-old trio featuring double bassist Sławomir Kurkiewicz and drummer Michał Miśkiewicz augmented by the presence of Stockholm-born saxophonist Joakim Milder, now added to the line-up.

Speaking from Warsaw, Wasilewski was in Norway at the weekend performing with guitarist Jacob Young and with saxophonist Trygve Seim at the Cosmopolite club in Oslo on Sunday evening. This was a concert that followed on from the release of Young’s Forever Young album earlier this year, on which he and the other members of the trio joined Young and Seim to considerable effect. With a melodicism that draws you back to the well of Miles’ modal period retaining much of the Cool School sensibility and the instinct of confirmed modernists in the process the album was just magical, drummer Michał Miśkiewicz so measured and responsive, the flow a rising stream no one would even hope to stem.

Spark of Life was recorded more recently than Forever Young, in March this year in Switzerland. Something of a departure, an evolutionary move for the trio, not sizing up in the sense of becoming a quartet, the subtlety is that it’s the trio “plus”, so an integrated saxophonic voice is added to the core sound. The three distinctive phases of the band’s career so far are as a self-contained trio firstly, then, secondly, the trio within a group, as three-quarters of the Tomasz Stańko quartet, which by extension brought the three young players an international profile via Soul of Things, Suspended Night, and Lontano. And latterly after their solo deal and their most recent stage as artists on the label under their own steam forging their own mature identity with the acclaimed Trio, followed by January – an album that featured pieces by Gary Peacock and by Carla Bley included in the trio’s repertoire – and possibly best of all Faithful with its avant inclinations intact also recorded in Lugano where this new album Spark of Life came to be made.

The new album begins with what could be Wasilewski’s most significant composition to date, the tenderly elegiac ‘Austin’, one of four of his pieces on the album along with ‘Sudovian Dance’, and the title track itself ‘Spark of Life’. Marcin had got to know young piano prodigy Austin Peralta, who died aged only 22 in 2012, when Peralta was about 16 initially at the JazzBaltica festival in Germany where Wasilewski had been playing in the festival’s resident ensemble. The two got on really well and later they met up in the States where Wasilewski found himself touring with Stańko playing at the Jazz Bakery in LA. Wasilewski, away on tour, was devastated to learn the “horrible news” of the young rising star player’s death. The tribute is an incredible gesture and act of friendship that operates in a space that exists far beyond the grave.

The most unusual element of Spark of Life is an interpretation of Polish grunge band Hey’s emotive anthem ‘Do Rycerzy, do Szlachty, do Mieszczan’ (‘For the Knights, the Nobility, the Townspeople’), while the version of Sting’s ‘Message in a Bottle’ relies on more familiar rock material. The trio owe their earlier beginnings to a very different kind of inspiration, music from director Roman Polanski’s classic horror film Rosemary’s Baby, ‘Sleep Safe and Warm’ composed by Krzysztof Komeda, the abiding muse of Polish jazz. Wasilewski tells me about meeting Zofia Komeda, the composer’s widow, 20 years ago to ask permission to use her husband’s image on an early record of the trio’s and she even gave him some manuscript music of her husband’s, which Wasilewski still treasures. Wasilewski says he approaches Komeda, a huge inspiration on his playing, through Stańko’s first hand playing example in the 1960s, and tells a story of Stańko giving him a coat he had left behind on tour as Komeda once had gifted Stańko a jacket when he played with the composer in the 1960s. Stańko and the trio still play together occasionally, and there’s a concert coming up in Bruges soon for instance. 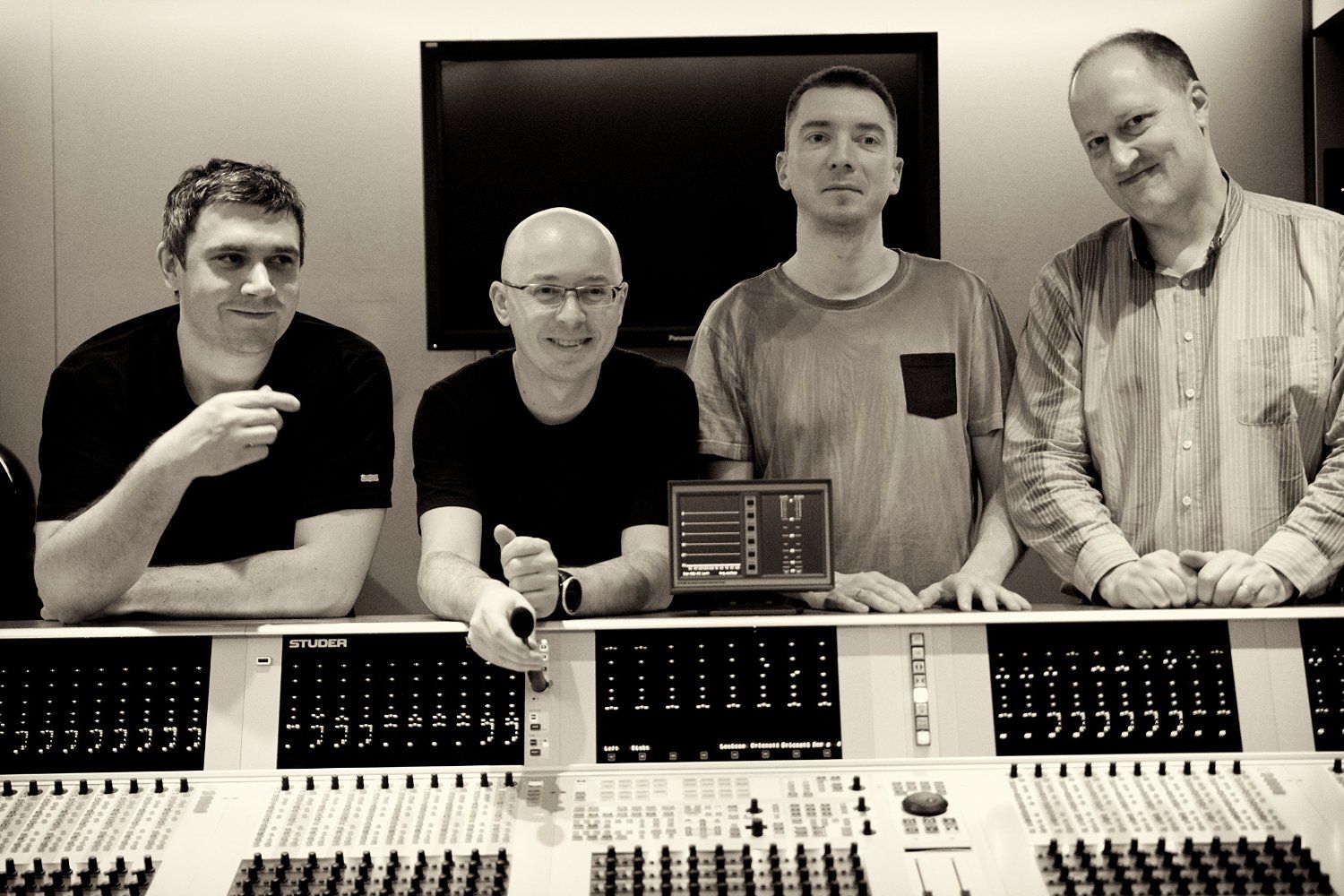 Spark of Life is completed, by Wasilewski’s ‘Three Reflections’, ‘Still’, written by Joakim Milder, a recalibrated version of Herbie Hancock’s classic ‘Actual Proof’, and the Łodz-born classical composer Grażyna Bacewicz’s 1950s-era composition ‘Largo’ arranged by bassist Kurkiewicz. This is a homage of a different kind to that of for Peralta, Wasilewski says, as the high school he and the bassist attended in Koszalin in the north of Poland is named after Bacewicz, one of Poland’s most lauded female classical composers. The album is completed by the inclusion of a variant on the title track.

The Wasilewski trio are neither a standards trio nor are they a trio that relies on rock or pop material primarily although their version of Björk’s ‘Hyperballad’ was an early success, and the rock-inspired aspect of their musical DNA surfaces effortlessly on Spark of Life. Wasilewski’s style is that of a bittersweet romantic to a certain extent with a strong melodic and modal style. He speaks of being influenced besides Komeda by Keith Jarrett, and you can also hear a little Paul Bley in his style particularly on the trio’s first solo album for ECM. In Lugano recording Spark of Life the trio were on familiar ground. The recording engineer, Stefano Amerio known perhaps more recently for his work with the hit Hamburg-based Tingvall trio, working hand in glove with producer Manfred Eicher. Wasilewski describes him as a very nice guy, a “warm kind of person.” “He does his job very professionally and works closely with Manfred. It’s a good combination, Manfred is so strong.” The Swiss radio and TV studio space exists in a medium sized hall, “a beautiful hall for music”, the pianist says, with a natural reverb, the musicians setting up as for a concert “as a regular band on stage.” The only difference is there was no audience present. Wasilewski won’t be drawn on where his ultimate studio is (he’s recorded in quite a few since the 1990s also appearing significantly with Manu Katché on the drummer’s remarkable Neighbourhood also featuring Stańko and Jan Garbarek) but explains it’s the “atmosphere” of the session that’s important above all else not so much place.

Five of the tracks on the album were first takes so there is that live quality to much of what you hear, something that is not so surprising given the band’s sheer ability and their leaning towards jazz very much as a spontaneously unique act of creation. Wasilewski says he’d like to do a live album but it would have to be selected from a number of concerts and that would take a lot of time recording on tour. He says he has good takes of the trio from a live concert in Lugano, and also one in Bonn made at Beethoven’s house.

The presence of tenor saxophone on the album in many ways emphasises Wasilewski’s natural predilection for bittersweet melody. Milder, who if you like is Wasilewski’s Bernt Rosengren (in the sense of the Komeda lineage), very much a heart-on-sleeve player and one that suits the style here maybe communicating laconic melody that much more directly. The rubato ballad feel of the title track has that directness a saxophone voice can add. Wasilewski refers to what he calls the “pressure of emotions” of the recording, something that is important to him, that interpretative side that is such an important aspect of the trio’s work. But there’s “a limit,” he says, “in the emotions.” 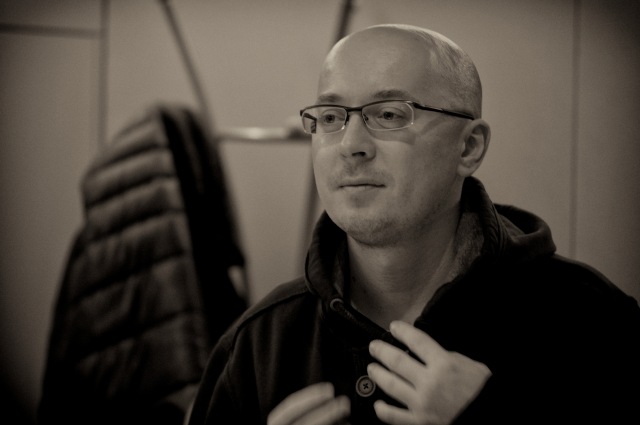 Wasilewski speaks in painterly terms when discussing the journey of the trio over the course of 20 years. He refers to the “colours” the band project, the arrangements like paintings. He says there’s a “chemistry” the trio possess, a distinguishing characteristic that would be very hard to parlay away, and refers to a phrase Joe Lovano used when the trio toured with the great saxophonist referring not to “free jazz” but as JoeLo puts it “jazz free”, a term that amuses the pianist as a term but as a concept one he takes very seriously. Perhaps it’s as if there’s a sense that what the trio are doing is setting an artistic impulse they all possess free to roam. There’s also that sense of vitality at play in all the trio’s work, and referring to Komeda’s music Wasilewski says Komeda’s music is “still alive” and again with the visual art metaphor a useful means of expression sees what the trio is doing as creating “collages”.

It’s all a long way from his young headphone-wearing days as a student of the music listening to Komeda on a Walkman. But even in those distant days he knew how powerful the music was to him, something he has never lost an awareness of. “I was really impressed by his melodic system. It was my first inspiration.” Some candles never need to be put out. Stephen Graham

Spark of Life (ECM) is released on 13 October

Marcin Wasilewski, top, and in the picture above. Sławomir Kurkiewicz, in the studio picture further above left, with Wasilewski, Michał Miśkiewicz, and Joakim Milder. Photos: Gildas Boclé/ECM