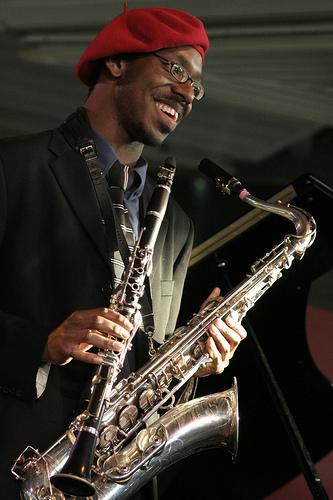 Who is in The Comet is Coming and how did you meet the other players? Tell me a little about each player (their instrumentation and general approach), and what attracts you to each of their style.
The Comet is Coming is Danalogue (Dan Leavers) and Betamax (Max Hallett) who usually play in a duo group called Soccer 96. I met them through being a fan of their band and checking their music out. They bring so much energy live that the first time I heard them play I was pretty much blown away, and said to myself: 'I've got to work with these guys'. That led to me guesting on a gig and sitting in with the group whenever I was around for the last couple of years. I guess you'd call what Soccer 96 does experimental popular music, though a lot of what emerges musically can be linked to directions pointed towards by modern players of  'jazz' music also. The thing that attracts me to their style is the driving intent whenever they play. There's a feeling there of really losing themselves totally in the music to the point of nullifying any genre association which could be placed on it.

What inspired the name of the band and why did it strike a chord?
The name of the group comes from a BBC Radiophonic Workshop piece of the same name. Once we heard this piece, with its allusions to sci-fi, cosmic remembrances and general space, it instantly struck a chord. We're exploring new sound worlds and aiming to destroy all musical ideals which are unfit for our purposes so the name stuck.

Where have you been rehearsing and for how long; and what’s the material you’ll be playing at XOYO? We rehearse in a warehouse space in Dalston called the Total Refreshment Centre which is an artistic living space with rehearsal facilities, studio and general great vibe. We decided to go into the studio for four days and create an album's worth of material that we compose together on the spot, then take some time producing, then rehearse the resulting tunes extensively to create a live set. The material we'll be performing at XOYO will be the resulting tunes.

How much improvising is there going on inside the band?
All the improvising is intuitive, in that we all play to the service of the mood or the vibe of the moment. The pieces we've created have scope for improvising either as extensive soloistic excursions or in the service of the song which might not sound like typical jazz soloing but still retains an element of freedom to make spontaneous decisions as to how far to push the pre-planned material.

How would you describe the overall style of the band; and how does it differ from other current projects you’re working on?
The ensemble is very different from say Sons of Kemet in that it is less rootsy, has less of an earthy sound. We're trying to take the listener into a futuristic world as opposed to reaching  towards the earth in our sonic journeys.
Cosmic. Sci-fi. Hipster. Punk. These are the first words that spring to mind in the general description.

Do you hope to embark on a tour with the band soon or enter the studio in the coming months?
The album has been recorded and now we're dedicating quite a bit of time producing it, hopefully to be ready in early 2014. We will hopefully be taking the band on the road.