View from The Hill

Three years sinceThe Poet proved a spark to ignite more interest in the then little known 26-year-old Chicago trumpeter Marquis Hill, his pulsing Terence Blanchard-esque revivalist hard bop instincts jostling for space within his own highly condensed compositions, he went on the following year to win the Thelonious Monk prize, part of the prize involving a recording contract with the Concord Music Group. 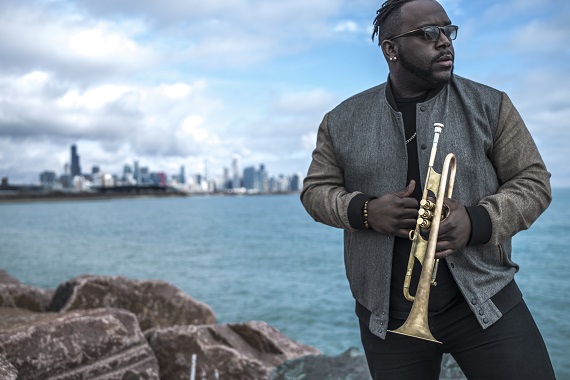 That record deal has turned into The Way We Play, to be released at the end of June, again with the Blacktet the name he gives his core band, who are alto saxophonist Christopher McBride, vibraphonist Justin Thomas, drummer Makaya McCraven, and bassist Joshua Ramos.

There is plenty of jazz history in this particular view from the Hill in the choice of tunes that includes a version of 1950s Gigi Gryce jam session favourite ‘Minority’ mashed in with his own tune ‘The Way We Play’. Listen out too for a version of Horace Silver’s little heard ‘Moon Rays’ plus a shimmering version of Herbie Hancock classic ‘Maiden Voyage.’

Singer Christie Dashiell also makes her mark with her accomplished take on classic jazz ballad ‘My Foolish Heart’ which is also included on the album. And you can listen to the Blacktet’s version featuring her vocal combined with Hill’s poised and highly expressive sound decorating the melody, top. SG