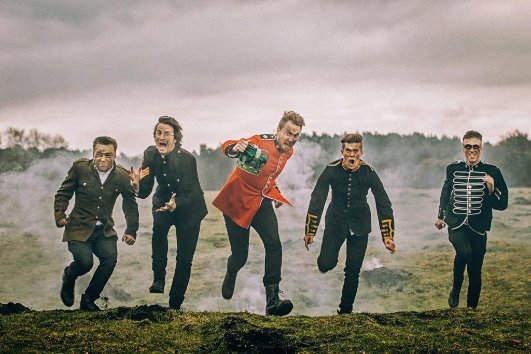 Hardly royalists, the pomp and Freddie Mercury-esque swagger of opening terrace chant ‘Flick the Beanstalk’, preposterously, is the closest Dave Morecroft’s courtiers and assorted palace flunkeys get to doff their hats to anyone.

Variously described as punk-jazz, prog or even, at the start of their existence, somewhat mysteriously avant funk, WorldService Project have moved label and usher in some personnel changes for this their new, ‘his Maj’, Chris Sharkey-produced album.

The eight tracks are all Morecroft’s compositional oeuvre (seems a fair enough word given the arch circumstances), all distressed synths mauled and disturbingly caressed, poor kittens in his callous Django Bates-like disregard for standing on ceremony. Morecroft is as ever the moustache-twiddling ringmaster of his own carefully conceived flea circus, Raphael Clarkson’s renaissance man trombone solo on ‘Murano Faro’ the simmeringly sensuous ballad that restrains the hopping gothic bluster and the rocking out from going the full Rick Wakeman just in the nick of time.

Three years on from the Megasound-issued Fire in a Pet Shop arrangements are also by Sharkey and this introduces a certain skip and freshness to their burning drive and nutty energy.

Recorded in a Gwent studio last autumn there’s heavy jam-kindled brainstorming aplenty, keyboards that might as well be crossdressing as guitars that up the textural ante and ideas meter considerably.

Five and a half years since the highly Zappafied outfit made their debut with the fairly obscure Relentless this is their most lucid work. Tim Ower is on saxophone, Clarkson, as mentioned, trombone, Trinity Laban student Arthur O’Hara on beefy bass guitar replacing Conor Chaplin, a big part of the band story so far, and their latest drummer Harry Pope even manages to provide some earthy thumps and puts the boot in when needed.

Proggier than ever thanks to lots of clever effects and decibel decadence, the squeaky clown, Morecroft’s alter ego on penultimate track ‘Mr Giggles’, is like WSP’s very own sixth Beatle the band mischievously quoting ‘In The Mood’ the clown disgracing himself in the process somehow. The closing track is a riot of goblin-like voices and borderline madness.