Many Faces of Love

The beginning of February sees the US release of Polly Gibbons’ much anticipated new album Many Faces of Love.

Unusually for a UK jazz singer Gibbons, who is in her early-thirties, is now signed to a US indie jazz label who are releasing the album in the US first.

A seasoned performer Gibbons first surfaced in 2006 with her album What’s The Real Reason picking up a BBC Jazz Award nomination the same year completely out of the blue. 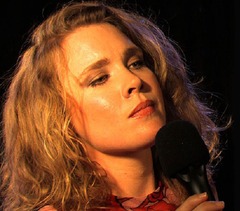 Gibbons, well known on the London club circuit as a classic stylist with strong interpretative skills, songs she chooses to sing on the new album include the eclecticism of Al Jarreau’s ‘So Good’ (above), Dr John’s ‘City Lights’ in the “losing love” portion of the album, Rickie Lee Jones’ ‘Company’ and the cult Kellaway/Bergmans song coming from the heart of the jazz-vocals tradition ‘I Have the Feeling I’ve Been Here Before.’ Former Bobby Darin musical director Roger Kellaway, co-writer of the song, which was written for Carmen McRae (check the audio below of Carmen singing the song in the 1970s at Chicago club Ratso’s), also appears on two songs on the Many Faces of Love bonus DVD. UK release is looking like March. Stephen Graham