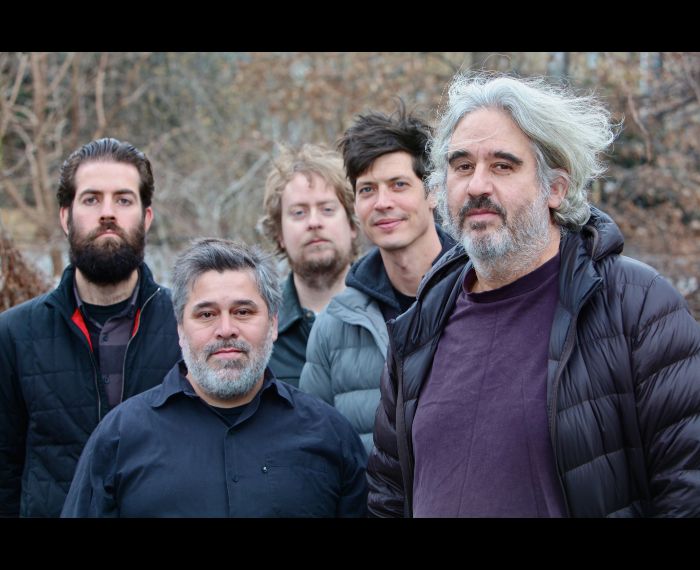 If you’re the sort of listener who likes “tunes” or easy solutions then You’ve Been Watching Me isn’t exactly made for you.

Berne’s experienced crew of reedsman Oscar Noriega, pianist Matt Mitchell and drummer Ches Smith, all familiar from 2013’s Shadow Man, plus new Snakeoiler guitarist Ryan Ferreira do however know how to tunnel deep into the cave of your inner musical consciousness.

While they insist on downplaying everything, a tough sometimes tonally dour shell protects thick clusters of harmonies and tightly wrapped micro-themes, sometimes they can be spikily daring and you can sense that there is a rejection of a lot of the contemporary commonplaces that exist in today’s more lumpen jazz particularly the styles constructed with an imagined past rather than any kind of future in mind.

Like music of industrial decay, an expression of a contemporary malaise (perhaps another way of looking at it), tidy cadences and neat tune structures aren’t available here. They have long since been demolished by a wrecking crew and Snakeoil have to make sense of the new situation.

Clouded by Berne’s ominously tart alto sound, which has great strength and a sense of command to it drawing voraciously from some of the great mentors from his earlier career, notably Julius Hemphill, when Berne manages to gain extra traction coupled particularly with the sheer mysterious drive of Mitchell’s harmonies say on the long and absorbing ‘Small World in a Small Town,’ then the band seems to move to a new level.

You’re certainly entering a world that belongs more to an art gallery than to the main stage of a music festival. Not so much a communal experience as a deeply personal one here, and you might think that you’re the only person in the world listening to this music. It certainly speaks as much of isolation as anything but rarely involves debilitating introspection.

And while there is a cynical almost world weary personality to some of what is here and which was recorded in the Clubhouse in New York state last December produced by David Torn (that nihilism might also sit alongside much post-punk music out there) there is also a very humane even poignant commentary at times particularly from Noriega, his contribution sometimes resembling some kind of oddball subplot to the main musical story when he breaks loose. There is also the widescreen vision of a significant jazz composer at work, three tracks in particular: ‘Small World in a Small Town’; ‘Embraceable Me’; and closer ‘False Impressions’ that demonstrate Berne’s ability at longer shape-shifting form, the subtle movement and neat stitching together of different facets of his band’s many abilities cleverly crafted and totally unselfconscious in its rendering.

Smith provides a looseness that is akin to say Gerald Cleaver’s role in certain groups but there is a more visceral power too tucked away in his ideas shed generating some of the more dramatic moments on the very unGershwin-like ‘Embraceable Me’. New boy Ferreira has a lovely Abercrombie-like moment in the sun on acoustic guitar on the very brief title track that is almost an interlude from another planet.

As a listener you may have to step out of your comfort zone to embrace what Berne and co are doing here although by the altoist’s sometimes confrontational standards this isn’t a difficult listen at all. If you do make that leap it certainly might challenge your preconceptions about what a lot of contemporary jazz actually is and act as a brutal reminder about just how many compromises many jazz musicians actually make as they venture ever closer to showbiz, a process where everything sounds eventually as if has been reheated in some sort of clapped out microwave. Berne’s brave approach couldn’t be further away from this laziness and here he goes deeper and deeper and that’s surely to all our benefit.

Released in the UK/Ireland on 27 April