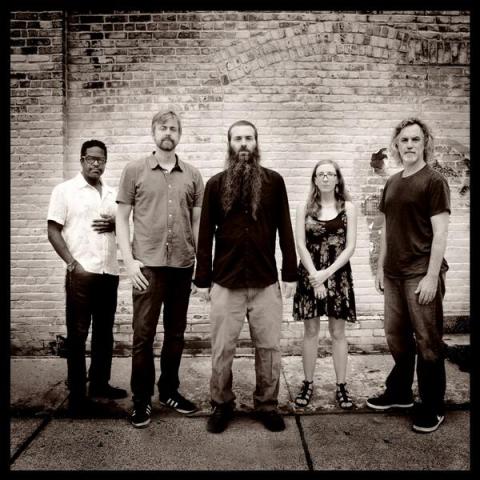 Plymouth
Plymouth
RareNoise Records   CD / vinyl / download ****
Jamie Saft, using an acoustic piano fed through an Echoplex as well as organ and Rhodes, builds on his earlier work with avant guitarist Joe Morris (XYX, Slobber Pup), joining forces with electric bassist Chris Lightcap, drummer Gerald Cleaver, and another highly resourceful guitarist from the free-jazz end of the spectrum, Mary Halvorson. Recorded and mixed by Saft at his studio Potterville there are three titles co-operatively written of course given it’s collective free improvisation and spontaneous. And it’s very tentative and controlled at first, Saft probing with long notes on organ Cleaver gradually coming in fashioning no-time and subtle pulse against the guitar textures circling the object: this could go anywhere. We have to wait for quite a few minutes for anything to happen and yet things are going on just obliquely under the surface and incrementally with Saft in the cockpit.

Giacomo Bruzzo’s visionary label, gradually building a strong reputation for its avant prog and free-jazz releases, is describing what we have here as “a three part improvised psychedelic suite” which might, while it’s helpful, be a bit distracting especially when all the circling on ‘Manomet’ suddenly turns on a micro-tonal sixpence the guitars taking up the momentum as Saft goes nuts behind them and Cleaver starts to show his DeJohnette-level chops.

The second track, not quite the title track as there’s an ‘i’ instead of the ‘y’ in ‘Plymouth’ (surely it still counts?) adds more microtones but there are Frisellian textures as well and Saft with all that echo wafts about, the atmosphere more sinister. Again Plymouth take a while to wind themselves up and then enter an almost ballad-like phase surprisingly for a while. ‘Standish’ lasts longer than your average concerto and here Saft moves into a space his label mate Roy Powell sometimes finds himself in. An exhilarating debut. SG
Released on 21 April