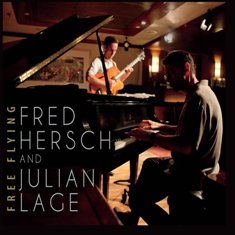 Fred Hersch and Julian Lage
Free Flying
Palmetto **** RECOMMENDED
Performing on an album together for the first time, Free Flying, recorded at Park Avenue hotel Kitano’s jazz club in New York earlier this year, Hersch and Lage, the latter best known now as a member of the high profile Gary Burton New Quartet, interpret nine tunes seven of which are Hersch’s. Of the pianist’s own compositions most arrive laden with dedications: Bill Frisell, with whom Hersch recorded Songs We Know 15 years ago, here the dedicatee of the homespun ‘Down Home’; Art Lande, the pianist who in the 1970s recorded a string of albums for ECM, 'gifted' the beautiful melody of ‘Heartland’; guitarist Jim Hall ‘Stealthiness’, unlike the other Hersch tunes here previously unrecorded; distinguished poet Mary Jo Salter 'Gravity's Pull', more of which later; and relating to the title track itself, Egberto Gismonti.

‘Songs Without Words #4 Duet’ sequenced as the opening track, and ‘Songs Without Words #3: Tango’ confusingly much further on, are nonetheless connected at least in title, the “tango” very unstrict and the first real place where Lage shows his considerable artistry falling down the frets in the last minute of the tune like an expert stunt man and swingingly candid on the track that follows, ‘Stealthiness’.

Free Flying follows the Hersch trio's Alive at the Vanguard recorded during a five-night run at the famed New York club the Village Vanguard made a year before this new duo set. There’s a review of that album here: www.marlbank.net/reviews/106-a-master-returns-to-the-spiritual-home-of-big-city-jazz.

Sam Rivers’ ‘Beatrice’, from the saxophonist’s 1965 debut album Fuchsia Swing Song; and ‘Monk’s Dream’ (Thelonious Monk) are the only two non-originals on an album that is busier, more intertwined and elaborate yet falling the right side of intimate, and just as essential as the Vanguard set. It’s the best I’ve heard of Lage so far on record, and Hersch’s playing is full of zest and optimism. Highlights? Well the pulsating opening of ‘Gravity’s Pull’ casts a spell that’s impossible to shatter, and there's plenty to savour throughout on what is an excellent return to guitar duets by Hersch.