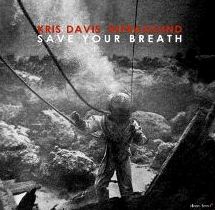 One of the more interesting pianists around, Kris Davis has been working with Human’s Steve Davis (no relation!) for an album to be released this year. But first up, although it is still a while off, is the release by her band Infrasound of Save Your Breath to be issued in early-May on the Portuguese Clean Feed label.

Still in her early thirties Davis’ records include solo album Massive Threads and the quintet album Capricorn Climber, and her playing credits include appearances with Tim Berne, Bill Frisell, and John Hollenbeck. The cover of Save Your Breath is above