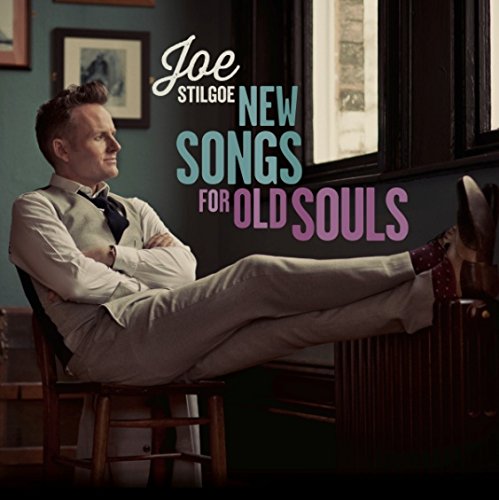 A guilty pleasure perhaps for some this latest album from jazz pianist, singer, and lyricist Joe Stilgoe, who has written most of the songs here and which also finds him duetting with Liane Carroll on Brian Wilson song ‘I Just Wasn’t Made For These Times.’

There is certainly a joie de vivre about the album if that in any way contributes to this guilty-pleasure factor which it may very well do, and for sure on opener ‘Totally’ you could almost picture Stilgoe standing by an old jukebox in a diner enjoying himself like some character in an old Hollywood movie you’d see on the TV flicking channels to avoid the endless reruns of Midsomer Murders and A Touch of Frost.

There is more of a Harry Connick side to ‘Nobody Cares Like Me’ horns bridling at the arc of the song arranged by Jamie Cullum musical director Tom Richards. The album was produced by James McMillan, who also worked on Stilgoe’s 2012 album We Look To The Stars, and recorded at McMillan’s studio in Hastings and also in Angel Studios in north London last autumn.

The core band here is Stilgoe with Empirical bassist Tom Farmer, guitarist Billy Adamson, and drummer Ben Reynolds although it sounds like a highly populated album not a small group affair even when the sound is stripped down. And fittingly extra horns appear mainly on four of the 12 tracks: ‘Nothing’s Changed’, ‘Roll’, ‘How To Fall in Love’ and ‘Two-Tones’, ex-Jamie Cullum bassist Chris Hill replacing Farmer on a couple of tracks. And lively new Gilad Atzmon drummer Chris Higginbottom steps in for Reynolds on ‘How to Fall in Love’ McMillan himself picking up his trumpet for the opening track and on ‘Raindrops in My Teacup’ the latter where Stilgoe is at his most antique, more Ivor Novello than Hutch Hutchinson perhaps in his crooning, easily the most mannered part of Old Souls.

A big band whose members include some heavyweight names drawn from modern-mainstream British jazz circles (for instance in guitarist Jim Mullen, trumpeter Noel Langley and trombonist Mark Nightingale) assembles for three tracks. And this stylistically varied album even takes a Cab Calloway twist on ‘Nothing’s Changed,’ certainly that aspect emerging in the skittish horns and very retro drum stampede, Stilgoe’s voice busy and mobile throughout moving seamlessly into gospel territory on ‘Roll’.

The lyrics are sometimes like something out of a Dennis Potter TV drama (Rainbows I’m stirring with a teaspoon/While moonbeams pile up beside the sea one small example belonging to a song that could even be glued on to a new rewritten space on the soundtrack of The Singing Detective). There is a nostalgic bounce to the Jack and the Beanstalk referencing number ‘Pocket Song’ and a strong narrative, even a little message at the end, Stilgoe managing to avoid sounding twee or worse too silkily insincere.

‘Two-Tones’ with its boogaloo feel is a little at odds with the even more vintage lyrics that reference Louis Prima, Nat King Cole, and Gene Kelly, a song that perhaps Georgie Fame could sing. But the Burton Lane/Alan Jay Lerner song ‘Too Late Now’ reveals Stilgoe’s serious side and impressive it is too, proof that he’s not inhabiting what might be loosely termed jazz cabaret by any means. Nostalgia for the golden age of cinema symbolised by “gold Charlie Chaplin’s shoes” in ‘Gold on Silver’ draws this clever, lyrically strong album to a close, Stilgoe marooned in the modernity of the 21st century, his love for all things nostalgic worn so fetchingly well. Stephen Graham